Everything happens for a reason I always say. A couple of weeks ago I had a 2016 bottle of Etna Bianco from Antonio Benanti during a meal.  At that time I honestly didn’t know the winery… but as I had enjoyed the bottle I was hoping I would be having it again one day. A few days later,  I saw an enouncement for future “wine & dine” events passing by at one of my all-time favorite restaurants Pazzo and as if faith wanted it I saw that one of the events was actually with Antonio Benanti . So I immediately called a few friends  (who I was able to convince to join with my enthusiasm 😊) and made the booking for this event.

I personally like “wine & dine” events a lot as it actually combines getting to know new wines (and its owners) and having a great meal .

I do want to point out that Etna wines and Sicilian wines are not necessarily the same thing, as first of all they have different soil, but also because they use different grapes. In Sicily the main focus for many years went to Nero d’Avola (only the last years), Chardonnay, Cabernet Sauvignon and Merlot grapes , were in the Etna region they always believed in using Etna’s native grapes like Nerello Cappuccio, Nerello Mascalese, Carricante  and even Minnella Bianca. Etna wines also only represent a very small percentage of wines made in Sicily.  It is often said that Etna is an island within an island 😊

The Benanti family lays at the basis of the terroir awareness and terroirs identification of the Etna region as they were one of the few people insisting one sticking with the local grape varieties. When Giuseppe Benanti started making wine from his family’s winery and estate vineyards in the late 1980s (with help from Salvo Foti), there were less than 10 producers in Etna, today there are 134. The largest increase only happened in the last few years as more producers started understanding the value and richness of the Etna soils (even Angello Gaja started experimenting on the Etna).  Today the Benanti’s make what is considered as one of  Italy’s best white wines, the Etna Bianco Superiore Pietramarina.  The Benanti family was in fact already making wine before the 1980’s (already since around the year 1800), but that was mainly for own use. Giuseppe Benanti basically revived the family’s old passion, with an extensive and selective study of the Etnean soils highly devoted to viticulture.  This shows that hard work pays off. Giuseppe is now also assisted by his 2 sons Antonio and Salvino.

During the “Pazzomania”  wine & dine we got to try the full range of  Benanti’s wines including a 2013 Pietramarina, an intensely scented varietal Carricante that is impressively structured and pure (very delicate) . On first nose, you get precise aromas of white peach, zesty pear and blanched almond. After a while the wine takes on more volume in the glass and displays its beautiful mineral nuances.  They had paired the Pietramarina with marinated swordfish and grilled asparagus. We also got served the ‘Etna Rosata’ (100% Nerello Mascalese), that if I can be totally honest the wine that convinced my the least for everything we tasted that night. The taste of the Rosata was very subtle, but you do notice a very nice minerality.   As surprise Antonio had also brought a 2017 Etna Bianco ‘Contrada Cavaliere’. A surprise we enjoyed a lot 😊. 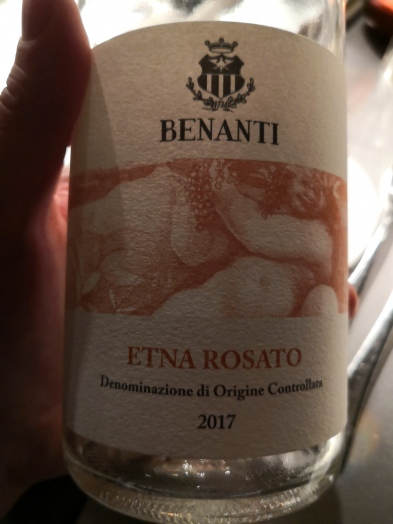 We continued the evening with a 2016 Contrada Monte Serra and a 2016 Nerello Cappuccio (paired with grilled broth fish and ravioli “a la Norma”) . Both very nice reds that just like the white wines Benanti produces, have lots of minerality. In case of the Monte Serra I enjoyed the hinds of cherries and rhubarb in the nose. Very smooth and fine tannin with juicy cherry fruit on the palate.  What is unique about the Nerello Cappuccio is that it is one of the very few bottlings made entirely with native grape Nerello Cappuccio. Here we also find back the red and blue fruit aromas. It is a fresh and easy to drink wine. 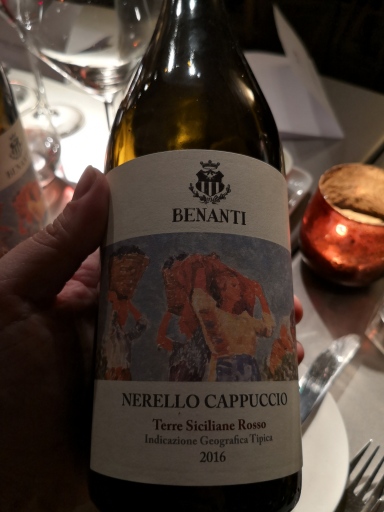 We finished with a 2013  Rovittello and the 2013 Serra della Contessa that  combine both Nerello Mascalese and Nerello Cappuccio but that come from different locations and hights, the Rovittello having perhaps the finest structure and capacity to age. However, it was the 2013 signature Serra della Contessa that is the actual “show horse” of the night (an opinion also shared by many critics and obtained  +90 scores from Robert Parker).  Both wines were served with the grilled pork (Pata Negra) with caponata and Artichokes . 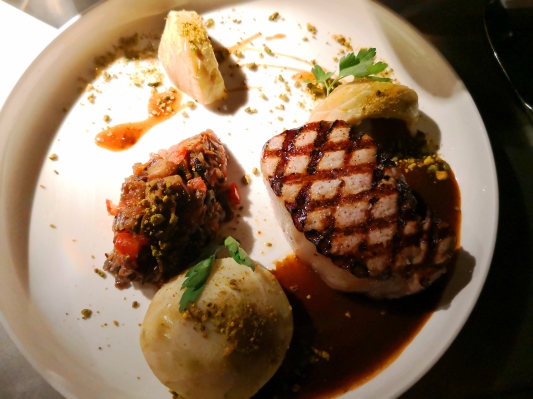