I’m sitting here in the sun thinking that is has been waaaay to long since my last blog post…. Although technically speaking I’ve still been writing, but for the Belgian Sommelier Association and next to that I am very busy co-organizing the ASI Best Sommelier of the World competition that will  be hosted in Antwerp in 2019 (seems far away, but I assure you that it isn’t 🙂 ).  I’ve also been busy as I became dad for the 2nd time and I can say for a fact that that doesn’t make organising your days easier 🙂

Even though I didn’t write too much for my blog anymore I did get to know many wonderful the last months. Last week for example I got to taste some top Sicilian wines made by the Planeta winery . Unlike many other wineries of this size that have been making wines for centuries Planeta only started making wines in the 90’s…  The Planeta family (from Spanish origin) has been in agriculture since 1585… the current generation is already the 17th generation in agriculture in Sicily. The Planeta winery story started in the Menfi/Sambuca region (South West of Sicily)  where 2 generations  bundled their forces or better Alessio, Santi and their uncle Diego Planeta (and eventually also Diego’s daughter Francesca)  with a little helping hand of oenologist Carlo Corino.

It might seem easy to make wines in a place like Sicily (or any southern wine regions) because of its constant sunshine, but that sunshine also has its disadvantages… lots of sun often translates into high sugars and basically also high alcohol percentage. Unfortunately this was also the reputation southern wines had for many years  high alcohol and not  easy to drink… BUT thanks to modern techniques and knowhow  we are able to harmonize and control all of this much better resulting in some magnificent wines.  Already from the start our friends from Planeta were determined to plant both local and international types of grape and it was an immediate success as in 1995 they were honored by many famous wine journalists/critics with their Chardonnay (that had been in wooden barrels).

Today 27 years later they have 6 wineries  (around 400ha) spread over Sicily  : Ulmo at Sambuca di Sicilia, Dispensa at Menfi, Dorilli at Vittoria, Buonivini at Noto, Feudo di Mezzo on Etna and finally La Baronia at Capo Milazzo.  It also seems they keep growing both in quality as quantity

Tasting the Planeta wines under the Sicilian sun would have been perfection, but tasting them in the heart of Brussels at restaurant Bocconi did get close (thanks to the warm and great people at my table obviously). The lunch also wouldn’t have been the same without the great care of host/sommelier Jean- François who clearly knows what he’s doing!! During the lunch I was fortunate enough to sit next to Alessio Planeta who spoke with lots of passion about his wines and the beautiful island of Sicliy. 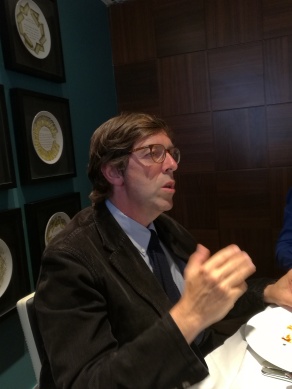 When you think of Silicy you think red wine, but for me their whites are as impressive.  It speaks for itself that one should always go crescendo, but if the first wine you get already is of such level that you don’t know it is possible to even go higher… but apparently it can ;-). The first wines we were served were the 2015 Cometa  that already has a cult status since his first edition and 2015 Eruzione Carricante 1614. The Cometa is fresh acidic, has a terrific savoury length and is a very stylish and wine that can convince everybody. What I think everybody would like about this wine is its aromatic notes of citrus and tropical fruit with some hinds of white peach and the fact that it doesn’t dissapoint when taking the first sip (on the contrary). If you like Rieseling style wines, I’m sure you’ll like the Eruzione 1614 as it contains 10% of Rieseling (90% Carricante) . A palate of fresh apricote and green apples with energizing minerals… again a wonderful easy to drink wine.

The previous wines were great, but the absolute star of the lunch was the 2014 Didacus which means Diego in Latin (referring to Diego Planeta who has been very important to the re-birth of the Sicilian wines). The Didacus was actually created as a ‘celebration’ wine for the 20 th anniversary of the first Chardonnay they made in 1994.  Although the price of this wine is quit high, it is majestic and very classy  wine that has everything I love:  full bodied, complex and yet very fresh with a magnificant finish that lasts forever :-)…I think that is all thanks to the old vines that are from 1985… It is a wine that can easily stand next to the best Burgundy Chardonnay’s. I hope you will get a chance to taste it some day, but as there are only few bottles this might become a very tricky quest.

After the wonderful whites it was time to discover some reds with a first in line the 2015 Mamertino (60% Nero d’avola 40% Nocera) followed by the 2007 and 2011 Santa Cicilia and as last but definitely not least the 2014 Eruzione 1614 Nerello Mascalese that for me together with the Didacus were the stars of the lunch (it will also not surprise you that I now have a few bottles of the Eruzione in my personal cellar).  The Marmetino has an elegant floral nose with hinds of roses and prunes  with refined tannines and velvety soft finish.

From the Santa Cicilia Alessio wanted us to put 2 different years next to each other, the 2007 and the 2011. I must say that I was very surprised how full of life the 2007 was. When you tast the wine you notice black fruit notes mixing on a minerally frame as bright acidity and spice drive the fruit-filled finish. Although I must also admit that when I tasted both wines they for some reason made me think of candy or cassis… If i would have to compare both I’d say the 2001 is a bit more bitter with hinds of chocolate and spices… My preference went to the 2007, but that’s a matter of personal taste.

They kept the best for last 🙂 the 2014 red Eruzione!! This wine is one with a LOT of potentional and can easily stay a few more years in your cellar. Light ruby Pinot Noir-like color. What I liked about this wine was the very gentle handling of tannins, which, with Nerello Mascalese, can easily get a bit rustic round the edges. Delicate Pinot Noir-like flavours, red fruits but needs more concentration and fatness on the palate… it basically found its way to my cellar at home 😉

Great wines,  but also great food!! Feast your eyes on some of the treats we were served 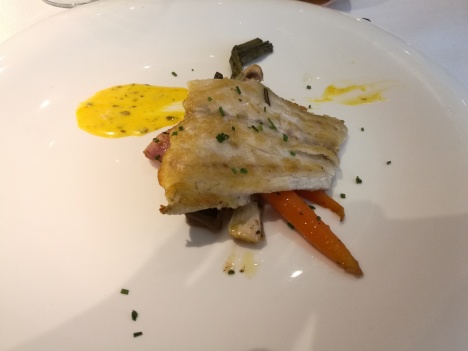 I think next time I defintely need to try these wines in the Sicilian sun (I think another wine trip is presenting itself 🙂 🙂 ) Thank you very much Alessio for this wonderful lunch!