For me cherries stand for warm summery weather while summery weather stands for time spend with family and enjoying yourself. This is exactly what I’ve been doing last weekend at the so called ‘Kriekenfestival’ by the Mort Subite Brewery just outside of Brussels. As we were at the ‘Kriekenfestival’ or ‘Cherry festival’ in English I’m sure you can guess which type of beer we were celebrating. Although I must emphasize Cherry beer is not a ‘regular/ordinary’ beer. Why? ‘Kriek Lambic’ is  part of the ‘Geuze’ beer family. A Geuze beer is special because no yeast gets added, the fermentation happens with the wild yeasts that float around in the air aka ‘spontaneous fermentation’. Secondly it is made by blending young and old lambics (Geuze beers let’s say), which is then bottled for a second fermentation (like champagne). And also usually there are no additives like sugar, etc… with exception to cherries. This results in the fact that Geuze usually also tastes a bit more bitter and the cherry beer more acid. Just like with wine it is the Master Brewer who makes the difference with his finishing touch and the ‘assemblies’ he decides to make.

I would be lying if I would say that I drink ‘Kriek’ (cherry) beer on a regular basis, but when I do drink one, it is rarely limited to one :-). The ‘Kriekenfestival’ was one of those moments… summery weather, music, streetfood and a nice Geuze or Kriek to cool off. The perfect recipe for a successful afternoon . I was also happy that my wife and daughter joined me.

The ‘krieken festival’ we went to was the 2nd edition due to the success of last year’s festival.The brewery basically opens its doors for everybody who wants to know more about the brewery and its products. Mort Subite had outdone itself this year as they also gave away free cherries to celebrate the great new harvest. I was surprised how many people were actually at this festival and I’m sure they didn’t only come for the free bag of cherries you got. I also think it were mostly local people as every seemed to know each other and the key word was without any doubt ‘FUN’.

Who says beer, says greasy food (and something you don’t have to tell me twice 😉 ). It was a though choice as I had to choose between deluxe hamburgs or hot dogs… in a world without my lovely wife looking over my shoulder (and me being very greedy) I would have gone for both… but I did think a bit of my well being and did go for the hot dog, in this case for me an Italian sausage, pesto, tomato, Parmesan cheese, basil and aioli. The New York  did also look daaaamn good, a classic BBQ sausage with sauerkraut, sweet baked onions, mustard and ketchup OR chicago with pickles and green peppers  (to give a few examples). I bet most men are now drooling on their keyboard 😉  My wife took the Zorba with feta cheese ,merguez sausage, greek coleslaw and olive paste. 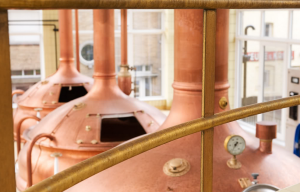 I was also fortunate enough to get a private tour with the Mort Subite Master Brewer Bruno Reinders telling anecdotes and amazing stories about the brewery. Like for example that the copper ‘alembics’ you see in the Mort Subite brewery where actually hidden during the World Wars and were only restored and reused recently. The tour didn’t take too long, as beer making doesn’t change that much (and I had already visited a few Geuze stekers (makers) in the area a while ago) AND tasting it is much more fun then hearing about it 😉 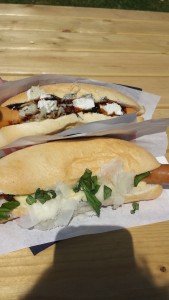