I know it has been a long since my last blogpost and no I did not stop with my blog 🙂 I just had to give priority to my very very soon to be born daughter (6-7weeks) or better to all the pre–birth stuff that have to get done + I do still have a day-time job that asks a lot of my attention the last few weeks… basically I had less or no time to write. I did have time to have a night out with friends 🙂 It was up to these friends to pick a restaurant and in that way ended up in restaurant Silo’s that only opened its doors on December first (2014)?! So it is/was still brand new! What I was surprised about was the amount of publicity and attention from magazines and bloggers it got…Until I found out that the 2 couples owning Silo’s used to be the former owner from the Michelin star awarded restaurant Folliez in Mechelen (and I did rememberDanny Vanderschueren talking about opening  a new restaurant (during Gala Diner of the Best Belgian Sommelier)) and a very well known caterer Daniel’s in Mechelen.  But instead of what you might think they decided to walk a different path serving well prepared classic dishes instead of the Michelin star type of food (so non gastronomical) for normal prices.

I didn’t know well how to describe the restaurant until I read Bruno Verspauwen’s article in DM magazine a while ago. He said Silo’s felt like being in a restaurant in the Meatpacking District in NYC… and it really is like that as the restaurant is located in a former industrial malt house like there are many industrial building in the meatpacking in NYC… FYI, Silo’s used to be a Malt house. Maybe picture below will help you picture it. Also this makes it the funnest factory visit ever 😉 😉 I know the picture is taken in the dark, but I’ll be going back in a few weeks and hopefully be able to take a picture in daylight… 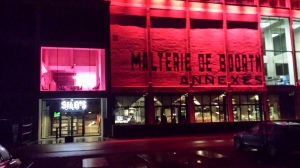 Silo’s is a big restaurant that doesn’t feel big. Let me clarify, normally when eating big restaurants one always fears a the bad acoustics  and you almost have to shout to the other people at your table… fear that wasn’t needed as they’re acoustics better acoustics that in lots of small restaurants :-). I was told by Danny Van Landtsheer that this on of their main priorities before opening the restaurant at this location! Apparently the reason for the good acoustics is the good foundation of the old factory and the silo’s that are still present in the restaurant… anyhow if that is the real reason or not I enjoyed the fact I didn’t have to shout 😉

As mentioned before you can only find not sophisticated dishes on the menu, my eye immediately fell on the marrow-bone with mustard and herb crust 🙂 NJAMMY !! (only not too good for my cholesterol though, but you can’t undo done things I always say 🙂 :-))  As main course the pork-cheek Belgian beer stew just seemed like the perfect follower for the marrow-bones. for me at least, my lovely wife had the codfish with and our friends a succulent piece of deer filet and Duroc pork rib 🙂  Only thing left on the plats was its varnish everything, so I guess everybody liked it. 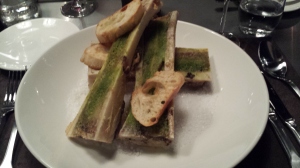 What I encourage 100% and found great is that ALL wines from on the menu can also be taken per glass!!! I know that sometimes you drank a bottle(s) but you are still craving for 1 more glass and not another bottle from the same wine to go with you dessert or just because you feel like 1 more glass… at silo’s it is possible, 2 thumbs up!! FYI they also had some great Luis Pato wines (just saying)

Resuming my dinner: I liked it and will be back 🙂 Oh and 1 more thing, do take the classic ‘Dame Blanche’ dessert with home made vanilla ice-cream and really chocolate sauce 🙂 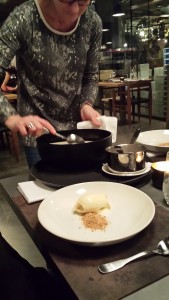 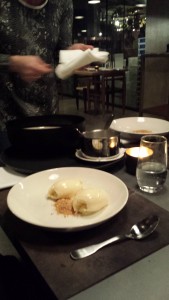 P.S.: I hope you won’t have to wait too long on my next blogpost… but that’s out of my hands…