I don’t know if  you guys remember it, but last summer the mascot of the La Chouffe brewery Marcel Chouffe (on picture below) got stolen. I’ve got no idea how they did it as the wooden sculpture weighs over 200kg , so it’s not that you can quickly move it…. but it seems that La Chouffe items are very wanted.

This Saturday we were proud and happy to be able to welcome Malcolm McChouffe aka Marcel’s cousin. Malcolm will now be pointing the direction towards the little town called Achouffe (where the La Chouffe beer is made), overlooking his cousin’s empty barrel, hoping one day he will be joined again by his missing cousin!  As the name might have already revealed, Malcolm is Scottish. So I cannot think of a better way to welcome Malcolm than on the tunes of the bagpipers?? Could you? I know not everybody likes it, but I really do (that’s the little drummer in me)!! I always feel like taking a snare drum and marching along!

I first feel like sharing a piece written by a Walloon writer and Beerologist Rony Couteure after a visit to the La Chouffe brewery. I really couldn’t express it better myself:

“In the annals of his forefathers McChouffe, a Scottish gnome from the Edinburgh woods, discovered the origins of his lineage. More and more he became suspicious that long lost nieces and nephews were waiting for him in the Belgian Ardennes. One Scottish morning he decided to bid farewell to the land of his birth and to go and seek out his foreign family. He travelled for months and  took shelter in many golden mushrooms along the way. He enjoyed luxurious herbs in the Belgian beer land until suddenly he found himself at the edge of the dark Ardennes wood. Without hesitation he entered the deep wood but swiftly lost his way between the trees which resembled each other more and more. For days he wandered around until suddenly a stimulating smell of hops lured him to the brewing village of Achouffe. McChouffe was welcomed with open arms by the Achouffe gnomes. They told him all about themselves and their lives and this culminated in a great feast which went on until the early hours of the morning.

During this intoxicating feast McChouffe met the fairy Fleurdor and, as if a bolt of lightening hit his heart,  he fell madly in love. The beautiful fairy persuaded him to give her the secret recipe for a  brown beer which was once brewed in his fatherland. With his Ardennes family he set everything in motion to brew this beer. As an old and wise gnome he returned to Scotland with the fairy Fleurdor. Their many children are still roaming around there.

In order to keep up this tradition, Brasserie d’Achouffe is still brewing this special brown beer: McChouffe which is rightfully named “Skotch van de Ardennen” (Scotch beer of the Ardennes).

This legend was told by Professor Servoisius, alias Ronny Coutteure, God rest him…”

Of course after all this visiting and listening our throats needed some moisture! Being a very curious person (at a brewery) and wanting to make sure I only give good notes to my readers I felt obligated to test all the types of beer the La Chouffe brewery offers (Yes, this is how much I love you guys). It must be said that the beers were served in tasting glasses, otherwise I’m not sure how my visit would have finished ;-). Anyhow please find the whole La Chouffe gamma on the following link. I did learn during this ‘tasting’ that I prefer dark beers :-), I’m not really into the Houblon Chouffe (aka Triple) as for me it is a bit to bitter, but according to what I’ve learned during my introduction in the world of beer & women, women prefer drinking bitter drinks… so ladies do the test!

At the end there is only one question to ask ourselfs 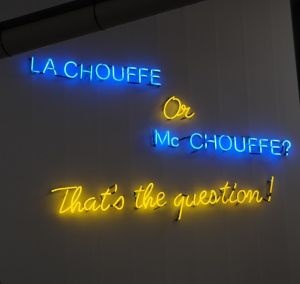 I do hope you guys will one day be able to visit this brewery and very beautiful part of Belgium! With a good glace of La Chouffe of course… I got enchanted, hope you will too. We can only hope that one day the empty barrel beside Malcolm will be joined again by his cousin Marcel.

FYI, Malcolm is under camera surveillance, so don’t get any crazy ideas!