Los Angeles is definitely one of my preferred destinations during the winter… as in Europe it is freezing cold by that time.

From the second you then walk off the plane you feel the sun spreading its warm glow over California. I find it just wonderful; especially knowing it was –12°C when you got on the plane. I’ve already been a  few times to LA and thanks to a few buddies of mine I’ve been able to experience  LA at its best!! I hereby want to thank them for that  :-).  It might not be the most beautiful city in the US, but there is definitely something about this city that keeps attracting me. Everybody knows the touristy things like Kodak theatre, LA strip, Malibu, Rodeo drive, etc… which you of course have to see when you’re there, but knowing the real LA, that’s what it is all about ! 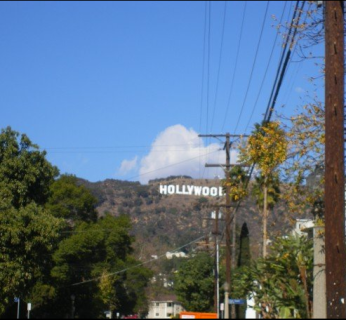 When in Rome, do as the Romans…. So when in LA, do as the LA people!!  One of my favorite hangouts and for sure a ‘must do’ in LA is the Baked Potato, THE FUNKIEST PLACE ever!! An old LA underground club, where the most amazing artists have performed and had jam sessions. All the walls have pictures and autographs of every artist that played here. Ofcourse once you are here, you have to try one of the jacket potatoes!  Check out the calendar, you might be surprised who you’ll be able to catch playing! It is really worth the trip. You might also wanna check out King Chris and The Groove Thang at Backstage Bar And Grill. A trip to House of Bluesis also really nice.

Who thinks fast food, thinks US.  I re-quote when in Rome …. (Thank god my girlfriend wasn’t with me, otherwise the romans would have had different habits 😉 ) The best burgers are without any doubt the In n’ out burgers, no freezers, etc… Everything gets freshly made on the spot! Most of their restaurants are drive-in only. A restaurant that also has seating possibility is the one on Ventura blvd, Woodland Hills. On the corner of La Brea and Melrose you’ll find the world’s most famous and huge celebrity hangout  Pink’s hot dogs

Don’t know if they are the best, but believe me, they were really good!! I must admit that taking the 9inch chili dog was tempting … but I got my senses back and tried the normal chili dog, some mustard, chili & onions.. mmmmm (I bet my LA friends feel like jumping in their car and get one of those puppies). But for the ultimate experience you should really have the best pastrami sandwich ever at Johnny pastrami’s. Take the Johnny’s famous pastrami dip and you’re golden! By the way, this place is close the LAX, so get one before you head back home.  At this point, you might also wanna try some doughnuts?  I needed some convincing at first, but once I entered the Krispy Kreme’sshop I was sold. The time you would want to go, is when  they are freshly making them. The first bite you take out of a glazed doughnut (filled or unfilled), you really believe that sugar heaven exists!! WOW!! Although I have to admit I’m glad they don’t have a shop in Belgium, I wouldn’t be able to stop eating them. 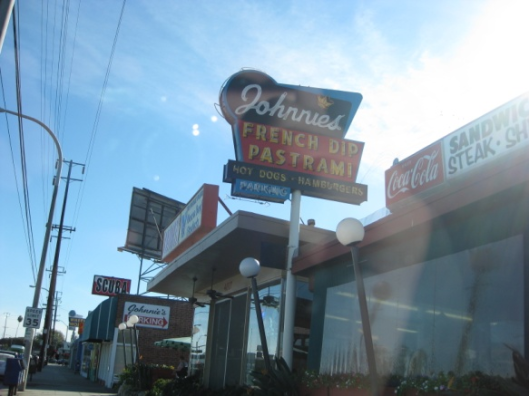 The places above are obviously more a snack thing. In the evening I need something more consistent  :-). A few classics in LA or the States would beThe Cheesecake factory, the red lobster, etc… but I’m always in for something new. Most of my friends know I like this, so my buddy Rick and his wife have taking me to a few authentic Korean restaurants in Korea town and thank god Rick’s wife is Korean, as everything happens in Korean. The first restaurant we went to had like this big grill in the middle of the table on which they put really thin meat and countless little cups with different kind of dishes on the table like spicy stuff (not to their standards) , sweet-sour, etc… it was endless, but it was a great experience and I am definitely going back!! The second one had, the Seoul garden, more or less the same amount of side dishes, but this time it was, it was a kind of fondue pot filled with fish or meat broth (bouillon)   where you would ‘cook’ the fish or meat instead of a grill … again a really nice experience. It is actually called Shabu Shabu. 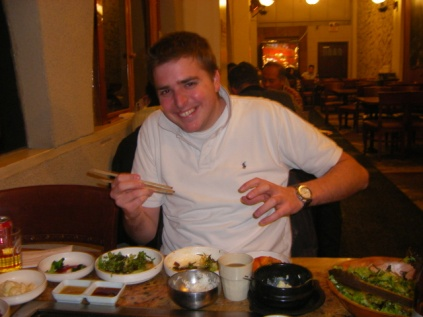 You cannot go to the US and don’t try some BBQ meat, ribs or burgers… you should really go to Tony Roma’sor Wood Rangeand taste their baby back ribs. Normally I’m not really into spareribs, but man were they good!!

My list could go on and on with great places my friends took me. But if you ever go to LA and you are interested in more info, just let me know!!