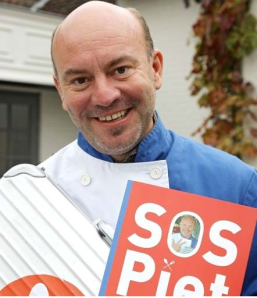 Yesterday it was Piet Huysentruyt time. For all you people who don’t know him, Piet Huysentruyt is without any doubt one of the most famous tv chefs in Belgium.  He used to own a Michelin star awarded restaurant and he still owns a restaurant in the South of France. The idea of Piet is that cooking doesn’t have to be complicated. He always tries to explain the art of cooking in the simplest way. He does this in a TV show called ‘SOS Piet’  where he  goes to people’s homes to fix their cooking problems. Besides that, he also shares his knowledge through his books.  The fact that he has sold more than 1 million copies of them says enough! (knowing that Belgium is not a huge country).

So yesterday I decided to prepare a dish with “Brussels Sprouts” from Piet’s  “Leven & Koken als Piet in Frankrijk” (living and cooking like Piet in France) cookbook. This cookbook is divided in 4 parts, the four seasons to be more precise. In every part/season he gives some great recipes that would fit perfectly in that specific season. I made the “Grilled quail with mashed sprouts” and gave it a little Spinelli twist. The original recipe would be a quail  covered with bacon and a gravy sauce. Here I used chicken instead of quail and instead of rolling the bacon around, I used bacon cubes. For the sauce after baking the chicken and bacon in same pan, I added some Porto and squeezed Orange juice and a little bit of butter to bind the sauce (reason, I still had an orange in my fridge). The mashed sprouts is exactly as in the book (p107). Basically cook 500g of sprouts with 2 or 3 potatoes (depending on size) and some garlic. When cooked mash them, add salt, pepper and some nutmeg and in case you like it some cream or milk.

I’m pretty satisfied with the result. 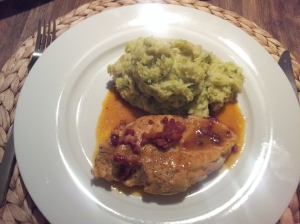 If you like the Piet Huysentruyt recipes, you can either buy one of his books, look at the Belgian tv channel VTM just before the news or you can look on the zesta website.

What was your last dish you made out of a cookbook? Let me know!!