The following question is without any doubt a very popular quiz question “What is the capital of Canada?” funny enough most people will be wrongly answering “Toronto” instead of “Ottawa” which is the actual capital… I’m not sure why, but I will try to tell you what makes Toronto a very special place (besides me having family there). If you would be thinking visiting Toronto don’t do this at wintertime, wait for the spring or summer! I’ve been there in both seasons and in wintertime it is sooooooo cold, when the wind is blowing it feels like little razors cutting in your skin. On top of that the city is so much more beautiful in the warmer season, all the flowers, being able to sit outside to eat or drink, …

Toronto is a ‘smaller’ and calmer version of New York to my opinion. I know there is only 1 NYC, but did you know that most movies that seem like they are recorded in NYC are actually recorded in Toronto?! Next time you see a movie in “NYC” check the credits from the movie and I’m sure they’ll be thanking the city of Toronto.  Toronto even has their own mini ‘Time square’ aka Dundas Square  🙂

I know I did already mention it in previous post of cities (and will keep mentioning it) I’ve visited, the way to get to know a city it taking a sightseeing bus on the first day! So that’s what we did (this wasn’t my first time in Toronto, but it was for my fiancée). You just get such a good overview of the city and it is easier to see which parts you would want to explore further. I can also strongly advise you to take the boatride in the sightseeing package as this way you’ll get to see Toronto in a front view (great to take pictures)! You also get the see the islands in front of Toronto … Yes the islands which also has one nudist beach (for those who would be into this  … sorry no pictures :-).) and one of the smallest airports in the world. In case you don’t feel like taking a boat y ou also have a great view of the airport and the islands when going on top of the CN Tower. 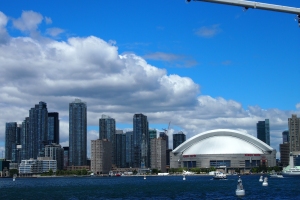 The CN tower is without any doubt one THE most important landmarks (ok, maybe also Rogers center), it isn’t cheap to go on top, but it is worth it as you get a really beautiful overview of this city and it is then that you notice that it is a very green city with lots of trees and parks… 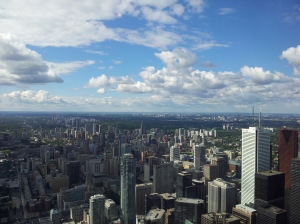 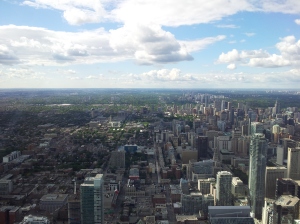 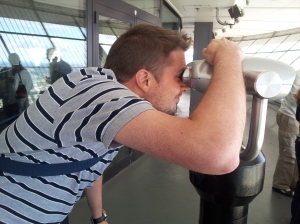 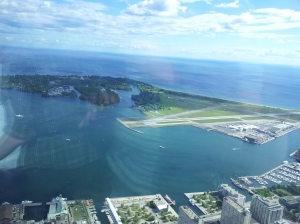 One thing I’ve learned during the sightseeing is that Toronto is a very new city when it comes to architecture. Why? Because since the 18th century until now, there have been more fires in Toronto than snow 🙂 Really I think every building you see in Toronto has at least burned down once in its history 🙂  But nevertheless there are some very beautiful buildings and houses in downtown Toronto! From very modern architecture and reinstatements of buildings that burned down. 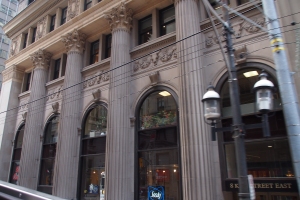 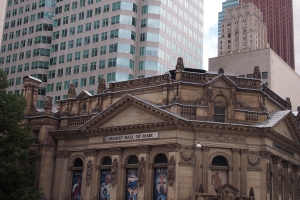 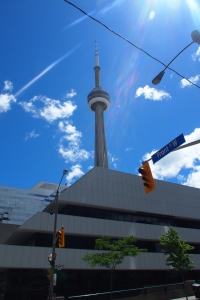 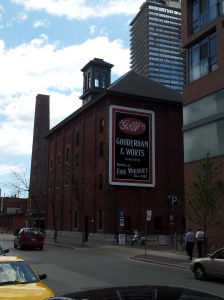 For the shopaholics amongst you, I’m sure Toronto will also have a lot to offer for you! Try to get to Eaton Center, probably one of the biggest malls I’ve ever seen! You could also just walk down on Yonge street, but I would think twice if you would want to walk the whole street as this is one of the longest streets (with sidewalk) in the world and it would take you around 48hours to walk from North to South 🙂 but then again women always like to shop until they drop 🙂

To be continued as I’m not done talking yet and I still didn’t talk about the food…. so stay tuned!