From all the tasting we did at clos d’opleeuw’s vineyard (that  you could read about in my previous blopost) a person becomes very hungry 🙂 luckily Kris Lismont is owner from a restaurant called “Mondevino”. Mondevino might not immediately ring a bell, but maybe restaurant “Ambrozijn” might sound more familiar. Restaurant Ambrozijn was the restaurant Kris Lismont had with his brother Johan, but earlier this year the brothers decided to go their own way. Johan will be focusing on teaching young cooks all tips and tricks. Kris on the other hand continued with the restaurant, but with a slightly different approach and concept where the focus will be mostly on wine, this resulted in Mondevino.

I got instant feeling of happiness when entering Mondevino, not only because of the nice selection of wines you immediately see (I saw some beauties I wouldn’t mind trying), but also because of the very warm welcome (aka Limburg hospitality) Kris Lismont and his wife give you! 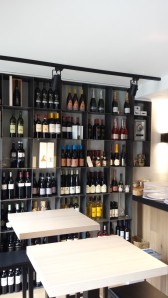 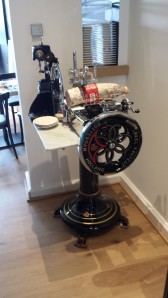 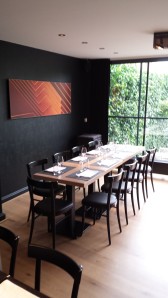 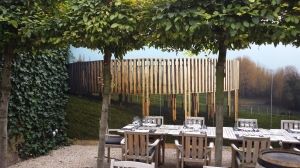 To make the lunch even more fun Kris decided to do a blind wine tasting. So with every course we were given 3 different glasses of wine from which we had to guess the country they were from and which was the best pairing with the dish. I know it might be they did it especially for us, but you should try it sometimes! Finding the country was obviously the most difficult, or at least it was for me 🙂 although sometimes the tastes seemed familiar, but I just couldn’t figure it out. At least everything after our glass of Champagne 🙂 Kris bought this bottle (Henri Giraud) during his trip to the Champagne region and wasn’t sure how it would be, I say it was good

The first dish they served us was salmon with tepid potato slices and chive cream. The wines we got with it (first without knowing the kinds) were a 2012 Chateau Simon Graves Blanc (FR), 2009 Pinot Bianco (IT) and a 2012 El Hada (Verdejo – ES). It is strange that now that they gave us the choice one really starts drinking/tasting different. I mean normally you just drink whatever they give you and don’t really think if it really works together with the dish, but this time when having to choose between those 3 you start to think which taste goes best together… Me personally I don’t know the technical details behind it, but at some point you just feel/taste it that the combination is right! Cant’ explain it, it just is like that 🙂 I’m also glad my taste buds where nearly as good as the ones from the pros. I didn’t guess the countries, but I did guess which one was best with the dish and the winner was the Verdejo. (Everybody agreed on this one) 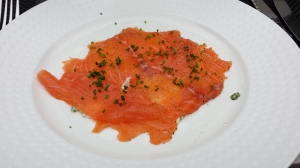 The next round was the same, but with red wines in combination with some Lomo Duroc with Blackwell sauce. This dish needed some strong, but not too strong though. They did chose to go for the same countries as with the white wines, but again we only knew that afterwards. The wines we had were a 2009 Chateau Argadens  (FR), a 2010 Les Crestes (ES) and a 2011 Dolcetto d’Alba (IT). It was the Dolcetto d’Alba that fitted best with the Lomo Duroc… it didn’t overpower the taste of the food, but was still powerful enough… and it might be a coincidence that Dolcetto is one of my preferred wines. 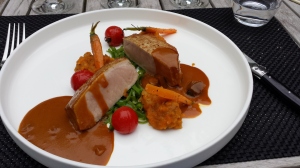 We finished our meal with a Trifle of red fruit from the area, this time no wine as we still had to visit 2 more vineyards and the line has to be drawn somewhere right? 😉

To summarize this lunch experience, it was not only a delicious meal, but also very educational one. I will definitely be back, if only already for Kris’ enthusiasm!

Definitely a nice spot to stop during your trip(s) in the beautiful hills of Haspengouw!

One thought on “A trip to little Burgundy the sequel”