The last vineyard we did on our trip was Abbazia Monte Oliveto, which is just like Castello d’albola a vineyard of the Zonin group. Unlike most of the other vineyard the Zonin Family has, this is a much smaller estate where only produce 3 types of wine, 2 white ones and 1 red. I know I said Castello d’albola was beautiful, but although Abbazia monte Oliveto is much smaller it sure is a hidden treasure. At the front you have a view on the only a stone throw away charming mediaeval town San Gimignano (where I once met Danny Devitto 🙂 ) . And on the other side a spectacular view on beautiful typical Tuscany hills… I wouldn’t mind waking up with a view like this every morning (which would even be possible as they have 7 rooms )

Back to the “Abbey” which would be the English word for Abbazia. Abbazia Monte Oliveto is as I mentioned a rather small estate, with “only” 18hectares of land of which not all of it being covered by vines. Small is maybe not the right word as I’ve been told there are around 170 winemakers in San Gimignano and I’m sure the San Gimignano premises isn’t infinite 🙂 :-). I personally couldn’t have imagined a more relaxing afternoon than at Abbazia Monte Oliveto! Not that I was stressed or uncomfortable at the other ones, but not sure what made me (and my partners in crime) even more relaxed here?? Maybe it was the view over the hills in combination with tasting the nice wine and good company? Who knows… Abbazia Monte Oliveto only has 3 wines of which 2 are Vernaccia, Gentilesca and the Vernaccia di San Gimignano both made from 100% Vernaccia grapes with the biggest difference in the winemaking the Gentilesca being made from grapes from older vines… Their 3rd wine is a ‘Sangiovese in purezza’, so a red wine called Fusaia. From the 2 Vernaccia’s I’m not sure which one I preferred, but to me the Gentilesca seemed to be the “pure” one and the Vernaccia di San Gimignano the “fruitier” one.

The longer we were sitting there the better the wine became… I didn’t feel like standing up to go “home” (Hotel that is) anymore… I’m sure you know that feeling that you’re so comfortable that moving is out of the question?? Well that’s the feeling we had. I think Carlos was even in trance 🙂 (Although I definitely think it was the wine, hahaha) But can you blame him with such a view?? 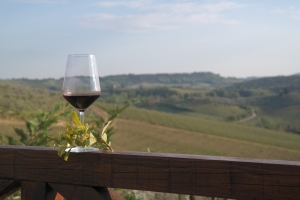 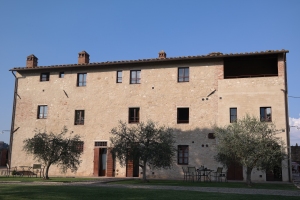 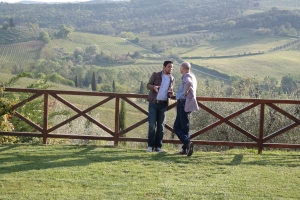 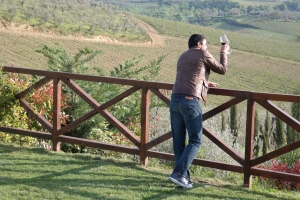 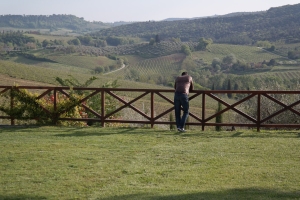 2 wines that I was also happy to taste on top of the Abbazia Monte Oliveto, were the wines from Podere San Cristoforo (no, no because it has my name in it) or as I call it “Lorenzo Zonin’s babies”… But I’ll talk about them more in detail another time, because I’ve been talking quit a lot about wines the last few posts). Ok, maybe just this, normally I don’t talk about the etiquette (I normally only focus what is on the inside), but for this one I just have to make an exception as it was entirely covered with Braille “writing” besides normal words… very special ! Obviously the bottle content was also of my liking…

Moral of my Abbazia Monte Oliveto story, definitely a place to visit and wines to try. 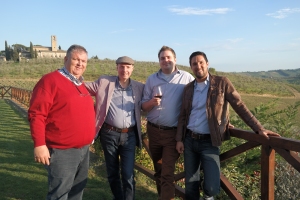 To be continued… (I promise no more wine talk 😉 )