A reason besides surfing to visit San Sebastian would be the food!! San Sebastian is for me one of the culinary highlights of Spain and it seems the Michelin guide agreed with me as San Sebastian has the biggest amount of  starred restaurants in 1 city per X  inhabitants. They have for example 3 three Michelin star restaurants (Arzak, Akelare and Martin Berasategui), Rekondo a restaurant with one of the most incredible wine cellars for old Spanish wines you’ll ever see (in the sommelier’s world an institute) and only 15 minute drive of one of the best fish restaurants in the world aka restaurant Elkano (to name a few) . I behaved!! YES I did!! I wanted to try all of these restaurants, but I promised my wife I would take a hold of myself. Now I have the perfect reason to go back with my favourite partner (after my wife) in crime to go to good restaurants aka Carlos 🙂 🙂 (YES Carlito prepare yourself for another trip after our next trip to France 😉 )

So to keep my promise I asked a few Spanish friends of mine which pinxtos (tapas) bars they would advice me to try (THANKS again César and Jaime). In Spain every tapas/pinxtos bar has one or more tapas/pinxtos it is famous for and it therefore is a habit to change bar after having tried their best one(s).The only problem being in our case was that the places we went to had such a great and big selection, that by the time we tried everything we wanted we didn’t feel going to another bar anymore (already ate too much 😦 )… with as exception to one night where we obliged ourselves to do it the Spanish way and move to another bar after 1 pinxto. What my wife on the other hand didn’t always like was the standing up to eat… and the ones where you could sit down were indeed the most popular with most non-Spanish people.

We liked all the tips Jaime and César gave us, but there are always places that are liked more than others…The pinxtos bars we enjoyed the most were Zeruko, Bergara and Zazpi. They were just more special and gave that extra attention to their pinxtos/tapas. This is also why we ate more than once in these places and I think we tried almost everything they had displayed or on the menu (no not greedy). FYI in these Pinxtos bars you can also sit.

Bar Zeruko was the bar with the biggest and most advanced (modern) pinxtos. They didn’t have the classic pinxtos you can find in all the other bars you’ll find in the old part of town. They thought out of the box and tried (and succeeded) with use of local ingredients making special pinxtos and serving them with a little sauce or serving them to get a different eating experience. With the last I mean for example that they serve it like you would get it at a Michelin star awarded restaurant with for example a smoking plate or used special food pairing techniques… hope the pictures below show you what I mean!? If not, just go there and see for yourself 🙂 or look on their facebook page. Do try the Bob-limón as a dessert!! 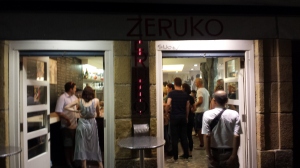 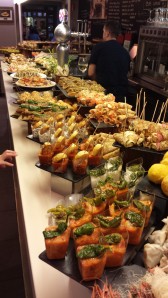 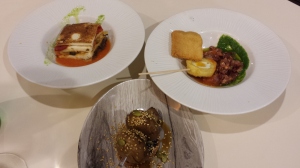 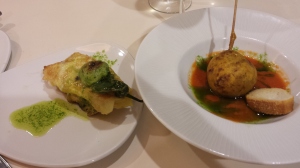 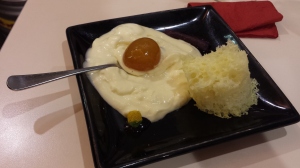 Bar Bergara on the other hand served more classic refined homemade pinxtos. What made them so special was that you could just taste they were all made with fresh ingredients and sometimes they did give some combinations you wouldn’t immediately expect to be good. Even something as ‘simple’ Iberian ham croquet, where most bars wouldn’t even bother of making them freshly and just buy them “freshly made” Bergara prefers making them themselves… but I’d choose homemade ones over the factory made any day!! They are so much more ‘moelleux’ and tasteful. It of course didn’t stop here… each single pinxtos was a delight to taste! Do try the Bakalao ajoarriero!! 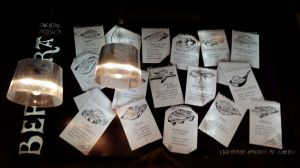 Zazpi was a place we looked up ourselves and was also a big surprise. When we entered we weren’t sure what to expect as unlike in most pinxtos bars at Zazpi there were no pinxtos on the counter yet (besides olives and a tortilla). Again here we tried ALL their pinxtos (or almost) + salted potatoes with garlic mayo 🙂 (no, not the patatas bravas) and still don’t regret it one bit!! We did start of slow with only ordering 2 croquettes to see how they were, but my wife was so greedy she ate both of them 🙂 🙂 No, I’m just kidding… she was just so hungry that I gave mine to her and decided to order all the rest from on the blackboard for me :-). Here again they were able surprise me in the way of serving and the full taste of every pinxtos. My favourite however was the ‘’Cubo de Panceta’ as the taste in some way reminded me a bit of one of my all time favourite dishes Rendang (Indonesian dish)… but everything we got was very tasty no doubt about that. 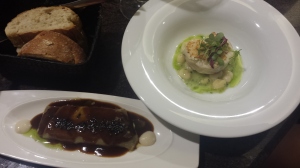 The restaurants that are still on my list to try the next time I get to San Sebastian can be found below and are all tips from 2 guys who know their gastronomy and therefore I don’t doubt the level of the list below is exceptional… so if you get to try them before me, let me know 🙂

I was surprised there was such a big bread culture in San Sebastian. I love bread so this made me a happy camper!! With bread culture I mean that they have different kinds of bread in all their bakeries and there were lots of bakeries in San Sebastian. One of our favourites and our fix value for lunch during our stay was “The loaf”. One of those places where you cannot pass without walking in and having the thought you immediately want a piece of bread or cake 🙂 . For our lunch I would always buy some fresh cute ham from a local butcher, one sliced whole-wheat bread (pan integral in Spanish) and as dessert a brownie with nuts… to eat it on the beach… talking about lunch with a view (our view on picture below).  We also ate at Loaf itself once… also very nice I had a BLT sandwich and orange cake and my love had a grilled cheese sandwich. 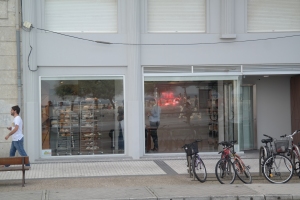 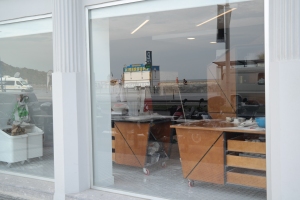 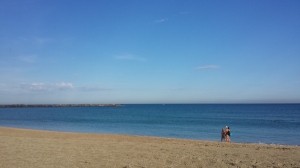 San Sebastian is a true paradise for people who like eating as much as I do!!