I know the contrast couldn’t be bigger, a few days ago I was writing about a family diner and now I’’m talking about being dressed in a tuxedo and eating at one best restaurants in Belgium aka Sea Grill (2*)… but I just go where the good food leads me 🙂 or in this case where the Belgian top sommeliers lead me ;-). Like every year this year it was time again to nominate this year Best Belgian Sommelier and for a few years now is held at the Royal Radisson Blue hotel where Yves Mattagne’s Sea Grill is located. So why go somewhere else if you have the best you can have under the same roof. To read more about the game itself and Antoine Lebehel’s victory please check my previous blogpost . 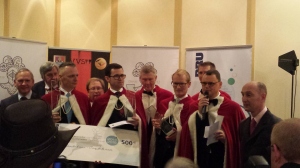 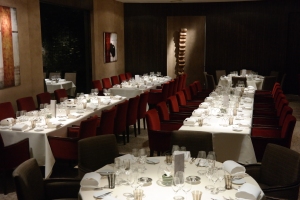 As some of you might already know at the age of 12 I started doing chef school, so seeing young upcoming talents from the chef school PIVA helping Yves Mattagne to prepare this year’s Gala dinner another success makes me nostalgic. Not that I ever worked in restaurants of this level. I mean the fact that great chefs like in this case Yves Mattagne (The piva students also often work at banquets of the Royal Family,etc…) ask PIVA to have their students help them says something about the level of school aims for their students. I wanted to mention PIVA because a good education and good guidance is very important and will lead to successful career or at least give the students the possibilities to achieve it (I didn’t always realize that when I was still in school). If you can already learn at this level while in school, I’m sure once they actually start working the sky is the limit?! And no, they didn’t only get the “shitty” jobs, they were a helping hand at all levels, from doing the ‘mise en place’, preparing plates to cleaning and doing dishes like all the other cooks working there. (FYI in the picture bellow people in white are from PIVA , people in Black from Sea grill itself). The same goes for the waiters, they were also assisted by students from PIVA. WELL DONE both the students as Lucas Delforge  (and the other teachers/chefs) of PIVA !! 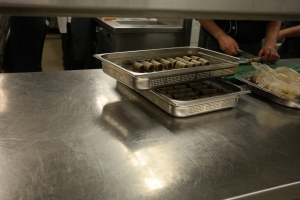 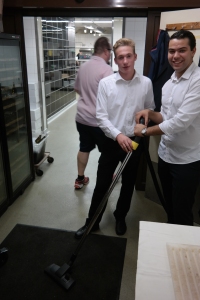 It wasn’t the first time I was fortunate enough to join one of the banquets at the Sea Grill and yet Yves Mattagne is always able to surprise me with both the menu as the actual pieces of flavored art we are served. The Trophy of Belgian Sommelier is just the perfect excuse for me to get to the Sea Grill again :-). This year’s menu was yet another gastronomical feast paired with some very nice wines (being the Gala from the Belgian Sommeliers I didn’t expect otherwise).

After a few very nice glasses of J.L Telmont champagne and some appetizers (didn’t have empty hands, so couldn’t take pictures :-() my appetite was bigger than ever… feast your eyes on the menu we got served (scroll over picture to see what it was). FYI in one of my next posts I’ll be talking in more detail about J.L Telmont champagne.

This dish was served with a white wine made by a Belgian winemaker (former IT consultant like me 🙂 ) in Burgundy (France). It was a 2011 Terre Blonde by Domaine de la Douaix nice round wine and soon an addition to my collection ;-).  The dish itself was very nice although initially I wasn’t sure about the black pudding, but the combo worked great and the dish went well with the wine.

We are very lucky people as with the grilled marrow we were served a unique champagne that was opened specially for this occasion (Normally they don’t open them easily), a Cuvée du Centenaire by J.L Telmont. What makes this wine so special is that it is a blend from wine from 1967 until 2005. The first smell made me think it would be a very heavy taste champagne, but after the first sip it was more fruity than imagined. Once it opened up it was like an angel p…. in your mouth 🙂 Nice!

Served with a 2010 Spanish 5 Fincas 2010 Reserva by Perelada. Its smell was familiar, but couldn’t exactly tell what it reminded me. Meat cooked with perfection and served with my favorite kind of mushrooms (porcini)… so for me they couldn’t go wrong.

Served with a 2007 Portuguese wine made 100% with  Touriga Nacional grapes by Quinta de lemos. Just the way I like my wines although I think the wine they served with the next dish would have also worked really well with this dish… but maybe that’s just because it is one of my favorite drinks :-). The dish itself maybe seemed a bit heavy for already being almost at the end, but I’m not a difficult person 😉

I do also enjoy that every year BRU seems to find the perfect way to stimulate people to drink more water  by having it served by very nice young ladies (I know I’m becoming a dad, but I’m not blind either 🙂 ) So I actually have to thank them for being an added value for helping me to get home safe.

A very nice meal! They serve the food the way I like it, the  “simple” way , I mean not too many ingredients that make you loose the focus on what you are actually eating. This doesn’t mean the food wasn’t served and prepared in a very refined way of course!!  The only thing I wasn’t too crazy about were the coffee ice-cubes that came with the dessert… but that’s a personal taste. Besides that I enjoyed my whole meal and the great company I had during this meal!! I can’t wait for next year’s gala. Yves Mattagne’s team together with the students from PIVA chef school made this year’s gala another success!!

3 thoughts on “Where good food leads me”