Italy has – just like France – some iconic wine estates. In Piemonte for example they have Gaja. In Tuscany they have even 3 of these iconic wine estates, Sassicaia (technically speaking this is Tenuta San Guido), Tignanello and Ornellaia. Today I will will give you some background about Ornellaia. The reason I mention the other 2 estates is that together they are better known as ‘Super Tuscans’. What makes them special is that they were the first vineyards in Italy to produce wines ‘bordeaux’ style by using French grapes in combination with the Tuscan ‘sangiovese’ grape… which basically results in very beautiful Italians wines with a French flare. A few nights ago I joined one these 3 estates, namely the Ornellaia estate, for a dinner at one of my favorite Italian restaurants in Belgium Spiga d’oro.

Before I continue I do want to mention that I’m not going to mingle myself in the discussion if wines like the top Ornellaia wines are not worth their price, as  I think that it depends of your financial resources if you find those wines expensive or not. It also depends if wish to spend your money on wines like this.. But I agree to say that without any doubt they are very good wines and I wouldn’t mind to have to drink them again 🙂 and that is what it is all about, right?

It was actually my friend Bram who asked me to join the Ornelaia dinner and I’m glad he did as I had never tried the Ornellaia wines before with exception for the ‘Le Volte’ I got as a Christmas present a few years ago (which I liked). The fact that the diner was taking place at Spiga d’oro was a bonus 🙂 Franco makes every dish a refined Italian celebration and pleasure for one’s taste buds 🙂 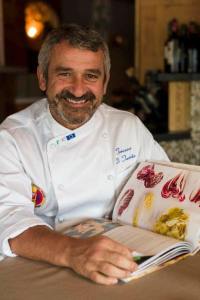 It is more than obvious that you cannot start your dinner with the best wine, you have to build up crescendo and end with the best… this way you’ll remember that best for always and crave for more :-). I think I must rephrase that sentence, as I’m sure it is every winemakers aim to make every wine his best wine!! Maybe I should have said you should end with the wine that got even more attention, care and patience from the winemaker:-). The purpose of an ‘entry’ level wine is getting to know a vineyard or estate. This wine will also be the wine with which 90% of the people will have the first contact with you estate, so you would want it to be an ‘everybody’s’ friend. I think that the winemakers of the Ornellaia estate succeeded in this purpose with ‘Le Volte’! During the dinner it was indeed the second time I tasted it and although this time it was the 2013 vintage and the one I had before the 2008 vintage, it tasted as youthfully fresh and left the same fruit-forward mouth feel as I remembered it. This time with a bit more tones of red cherry, sweet spice and I even want to say chocolate.

Le Volte’s freshness worked really nice with subtlety of the Veal involtino with fennel salami, ragú of chianina and a Fiorentina spinachsauce  we were served as a 1st course. As well as with the chickenliver crostini or short raised calzone with pecorino Toscano we were served as appetizers  (that were heavenly btw)… I’m a pizza fan, but not such a fan of pecorino cheese, but Franco showed me with this ‘simple’ dish that it’s all about how one prepares it… 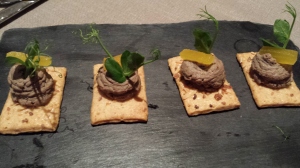 What was about to follow was an absolute winner for me from the moment I saw it on the menu, Papardell di Grano Duro with fresh truffle sausage from Panzano (made by a top butcher aka Cecchini). God, I so love sausage (I wanted to say Italian sausage, but ALL men reading it would take it in a wrong way 😉 pervs (I know, it takes one to know one ;-)). Now it was time to start exploring new unknown wines (for me) of the Ornellaia estate and go 1 step higher with the 2012 ‘Le Serre Nuove’ that with his fuller body can work against the ‘fattiness’ of the sausage and harmonize with its walnut and red fruity (because of the Merlot) aftertaste (although I think if you age this wine a bit more you have an even more sparkling star)

What was about to follow was in some ways an unexpected surprise as they only make 2000, yes 2000 bottles of this wine!! Resulting in only having around 60 bottles available in Belgium. I’m talking about the Ornellaia Bianco. I know it seems strange to have a white wine after 2 reds, but its strong enough to handle it. In this wine you’ll find a blend of Sauvignon and Viognier… a strange combo, but it works! That’s all I can say… the only down side, as they only make 2000 bottles buying one isn’t an option (for both budget and availability reasons 🙂 ).

I don’t want to suck up to Franco or so, but with the marinated chianina tartare with cantuccini breaded goose liver, Cetara anchovy and beetroot dish he showed me again that it’s all about the preparation. Just like pecorino (or Goat cheese), I’m not a too big fan of goose liver, the taste just doesn’t float my boat (Although I am a big pâté fan)… so I’m not sure what Franco did, maybe it was my favorite cookie crust around it that made it different, but I liked 🙂

The previous wine was without any doubt the headline of the night, but the wine I’m sure everybody came for was the one and only Ornellaia Superiore!! This wine needs something strong with it, so it got served with a Tagliata from grilled Chianina (red meat) with chianti salt, braised spinach with truffle pecorino, fried Porcini and chickpea crème. Both winners I’d say (wine and dish). The dish makes me happy because of its rich flavors (I love gravy and butter!!!) … and I can only say the same for the wine. I like my wines full bodied, strong and yet this wine is all about elegance with a long finish and interesting flavors of blueberries (some said tobacco, never tasted tobacco, so no idea how it tastes :-))

My wife was sooo jealous when she saw what Franco had prepared for us as dessert, a Vahlrona chocolate Baba in a vanilla soup with a blueberry basil coulis (My wife is a chocoholic).With the dessert we were served Ornus from Ornellaia (which comes from Fraxinus Ornus”, the Latin name for the Manna-Tree or Flowering Ash (in Italian, Orniello). To my opinion it was a bit too sweet . I don’t like to be ‘negative’ but it wasn’t 100% my taste, a little bit more acidity would have made it perfect. So it is not that they had force me to drink it, as it was nice, but not as much as I had hoped 🙂 (but that’s my taste)

Nevertheless, I had a wonderful evening full of wonderful experiences and I am glad I could be part of this unique event to try these unique wines!! (in unique company 🙂 )

In case you would want to purchase or  more information about the Ornellaia wines in Belgium I would advice you to contact Young Charly (for other countries check website  Ornellaia).