That I’m a fan of the Nebbiolo grape is clear by now I think? For the last few posts I’ve been talking to you about the Valtellina variant. This time however  I’ll be talking about its more famous brother from the neighboring region Piemonte  (Alba/Asti). I know it seemed that I don’t like Alba/Asti  or Barolo variant, but I do without any doubt like them. It is just that as my roots are in Vatellina it has a special place in my heart… but I wouldn’t call drinking a Barolo a big sacrifice 😉 It is just like Luciano Taliano (owner of the Montaribaldi vineyard) said during the meal we had a couple of days ago at Spiga d’oro:  he is fan of all his wines, but the Barbaresco is the apple of his eye… why? Because his family roots are in Barbaresco….

The older a Nebbiolo wine get the “easier” it gets to recognize them, because as they age the wines take on a ‘brick-orange’ shade at the rim of the glass. I know it might sound strange but you should just try it once putting an older Nebbiolo wine next to for example an older Sangiovese wine… The difference in color couldn’t be bigger. Next to its ‘characteristic’ color the Nebbiolo wine comes with fragrances of violets, tar, wild herbs, cherries, raspberries, truffles and tobacco. The most ideal location is at an elevation between 150 and 300 meter. What is special about the nebbiolo grape is that it usually only gets harvested in October, sometimes even at towards the end of the month. This is ‘special’ if you know most grapes in other regions get picked at the end of august or the latest at the end of September… then again the climate and hours of sun during the year obviously decides this … I know the Nebbiolo grape might seem like an easy grape to grow, but it isn’t as it does not adapt particularly well to various vineyard soil types. It prefers soils with high concentration of calcareous marl.

Just like in many other regions there are multiple approaches on making wine, a ‘traditional’ way and a ‘modern’ way. Both have their pro’s and contra’s. A contra of the traditional way or at least how it used to be done many years ago was the ‘lack’ of taking hygiene in consideration that would lead to the a bacterial infection and in the end development of off flavors and potential wine faults that would require at least 24 hours decanting to alleviate . Nowadays winemaking for both traditionalists and modernists include strict hygiene controls and the use of some modern winemaking equipment… so if you no worries anymore 🙂

The most famous wines from Piemonte made with the Nebbiolo grape are without doubt Barolo and Barbaresco. The way to distinguish the 2 wines was very well described by Giorgia Tontodonati from the Montaribaldi vineyard. Barbaresco is the ‘queen’ elegant, ‘softer’ and aromatic, Barolo is the ‘King’ very complex and strong.

I’ve already had the pleasure to have travelled many times to Piemonte to discover the many wonderful things this region has to offer. Next to their wonderful wines they  also have a very refined cuisine with evergreens like ravioli del plin, Tajarin al sugo, vitel tonné (vitello tonnato), Agnolotti, carne cruda alla piemontese, etc… BUT the other world famous trademark product of the of Piemonte is the one and only white truffle! Earlier this week all these wonderful things got combined at one of my preferred Italian restaurants in Belgium Spiga d’oro by my dear friend Franco Di Taranto… As tip of the iceberg he had invited Luciano Taliano from the Montaribaldi winery and trifolau Ezio who brought white truffles he had found the day before… only when in Alba itself you’ll get them on the day itself 🙂 To describe the evening in 1 word “Mythical”!! As I’m not really the man who sticks to one word (sorry for that)  I’ll tell you more about this wonderful evening that made me feel in Piemonte all over again!! 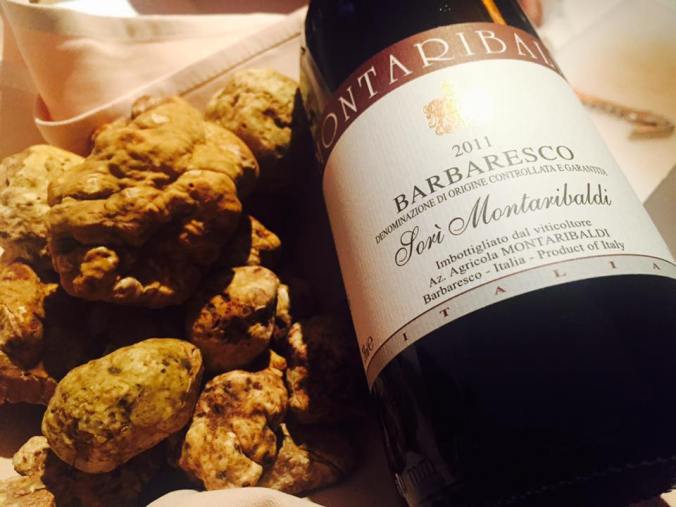 Montaribaldi is a quite young vineyard as the brothers Roberto and Luciano Taliano only opened it around 1994. Technically speaking the vineyard already existed earlier, but in 1994 as after he acquired the vineyards from his father Guiseppe aka ‘Pino’ who had founded it in 1968. The vineyard was named Montaribaldi after the old Roman roads that link the winery to the vineyards. Luciano’s goal was and still is to create a diverse selection of holdings that highlights the different wines of the region. 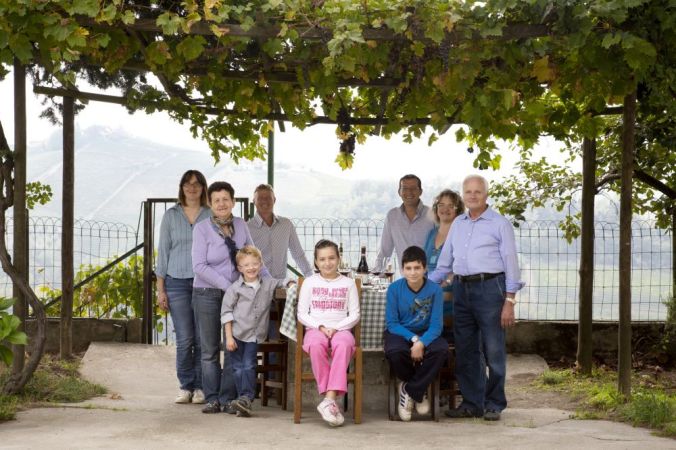 What I think is the reason for success of Montaribaldi wines is the accurate selection of grapes (the wine gets made on the land) and careful vinification. They also are very fortunate to have vines located in between the ones from their renowned neighbor Angelo Gaja. After having tasted their wines I can only come to the following conclusion their balance, length, intensity and concentration of flavors are all right how they supposed to be! Combine these wines with a meal by Franco and you have a feast… We were served the following menu with paired wines:

A secret celery and truffle salad ‘Arte e Querce’ prepared by Ezio’s wife Clelia. The salad got served with a 2015 Roero Arneis (white). I never saw a man so proud!! You could really tell truffles are Ezio’s passion as he was flaking it so proudly… very endearing to see 🙂

Robbilo tre latte with blac truffle, leek from Cervere, pears, beetroot and cugnamust from Nebbiolo. This dish got paired with a refreshing 2010 Langhe 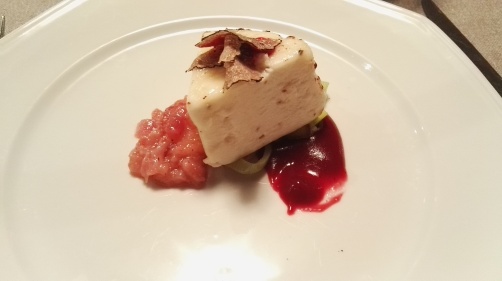 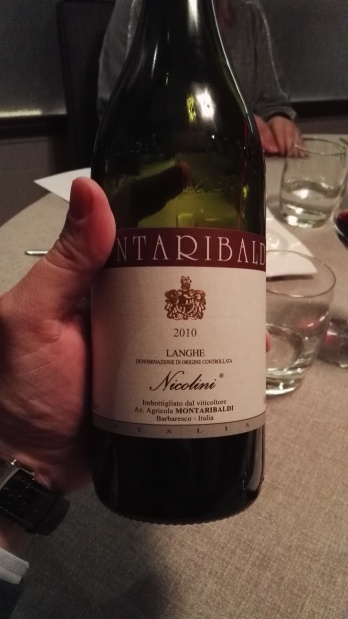 “Cocotte” (cheese fondu) from Fontina cheese with fennel sausage and white truffle flakes. Served with 2 Barbaresco’s from different pieces of land aka Palazzina and Sori. Both wines were from 2011. 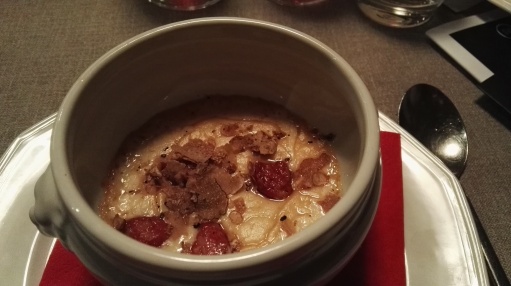 The main course of the evening was venison with a Barolo reduction with white truffle that got paired with the wine everybody was looking forward to drink the 2012 Barolo.

To end our meal we got served a chocolate dessert together with a Moscato d’asti. We did also get some white truffle flakes on our chocolate dessert, I didn’t refuse it but if it wouldn’t have been there the dessert would have equally been good 🙂

For me when you prepare a dish with truffles, it should be the truffles playing the main role!! Here again the key word ‘simplicity’ is important to make sure the truffle gets the justice it supposed to get. That’s exactly what my dear friend Franco did. My first words after my meal (and you can check with the people at my table) were “I feel like going to Piemonte now”!! So I guess a trip to Piemonte won’t be far off 😉 😉

I’m not sure why I always have to say which wine I prefer as I like all of them and I don’t want you guys to think that because I prefer one over the other it means the other wines were bad… as they weren’t  🙂  But just to keep everybody happy I admit that the Barbaresco’s charmed me most with on the first place the Sori. On the nose sweet and penetrating notes of licorice and chocolate, firmer and more sustained on the palate but with the roundness and solidity of a high quality extraction. Maybe the fact Luciano talked with so much love about it had an influence ooooooooor that Giorgia compared it with a queen 😉 😉 who knows?! One thing is for sure once again I’ll need to expand my wine cellar and definitely have another winetrip to Piemonte 🙂

Many thanks to Franco,  Aline, Toni, Luciano, Giorgia, Ezio and his wife for making this an unforgettable evening (and of course also my table guests 🙂 )