Two weeks ago I finally got to try the Brussels Tram experience, something I already wanted to do since their first ride 🙂  but for some reason or the other I never made it happen. So I was very happy when the Raimat  asked if my wife and I wanted to join them.  The Brussels tram experience is basically an ‘old’ tram they remodeled into a trendy restaurant setting and that takes you through Brussels in a 2h ride while enjoying a refined meal with accompanied drinks.  For food it were dishes created by Lionel Rigolet (Comme chez Soi**) that we were served.

I must be completely honest that the dishes weren’t  100% like you would have them at Comme chez soi itself, but when you see the size of the kitchen in the tram  and take all the shaking and bouncing in consideration (as the tram is moving) you can only have respect for the chef preparing the dishes as I wouldn’t be able to do better 🙂 !  On the menu that night:  as appetizers an Eel and sorrel soup, garlic foam, veal cannelloni with foie gras and  scallops with ras el-hanout, biscuit and a light parmesan cream. Continued by Cod with spices, small crunchy vegetables, grey North Sea shrimp, light horseradish cream;  Pressed beef stew. As mean course we were served  Free range cock supreme, shellfish jus with crayfish and tarragon. And as desert a  chocolate crémeux made with Belcolade 71% cocoa Ecuadorian chocolate, exotic caramel, passion fruit, mascarpone and eau de Villée liqueur . 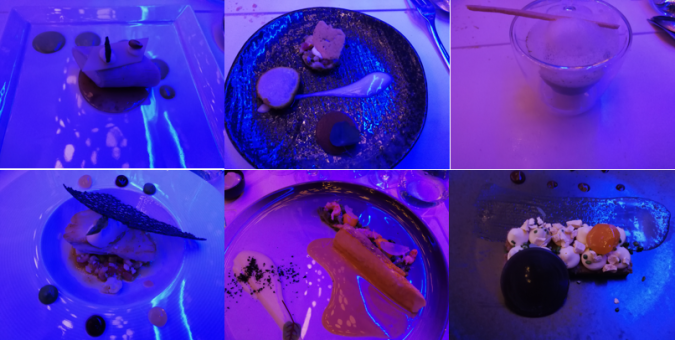 But the reason we were there were of course the wines from the Raimat winery. It was in 1914 that Manuel Raventós , son of  Josep Raventós  owner of  the Codorniu wineries (the first cava producers in Spain founded in the year 1515), bought 3500 ha of land in Raimat, Lleida (2 hour drive from Barcelona).  Nothing special you might think, but back in those days many people thought Manuel was gone crazy as it was a piece of desert and nobody thought he would succeed in his plan to grow vines. Now over 100 years later, millions of bottles of wine and many milestones (both for them as in Spanish wine making)  later like being the first to have a concrete building in Spain or  launching of the first to produce Albariño outside Galicia or being the first winery to classify their wine according to intensity did surprise me… and these are only 3 of the many milestones they’ve had!! He showed them 🙂 🙂 !! 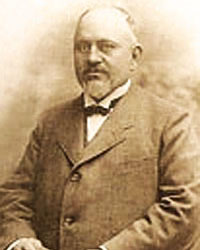 I know that many amongst you, just like me, find it difficult when you are in a supermarket to find the perfect wine (especially if you weren’t able to taste it first)… in the end most people are no wine experts and in the end just go for something they have heard talking about and/or a label that looks nice. It is for this reason that Raimat started investigating how to make this process clearer and easier for regular consumers.  What they do it classify the wines according to their intensity going from 1 (very light) to 10 (very intense) and put these numbers on the bottles . The intensity of a wine depends first of all of the kind of grape, but also the wine making method that was used. It is the combination of Organoleptic  characteristics (like the freshness, color, taste and aroma), Body (Volume, depth) and Barrel (period in barrels). To help the consumers even more (if they have a smartphone that is) they added the intensity legend on every bottle as well as the body/tasting notes and for people who want to know even more they added a QR code, where when scanning it you will find all info on that particular wine.  So if you want to find out it was a good study they did go to the supermarket and find out for yourself (in Belgium Raimat can be found at the Delhaize supermarkets) . I already find it a clever solution 🙂 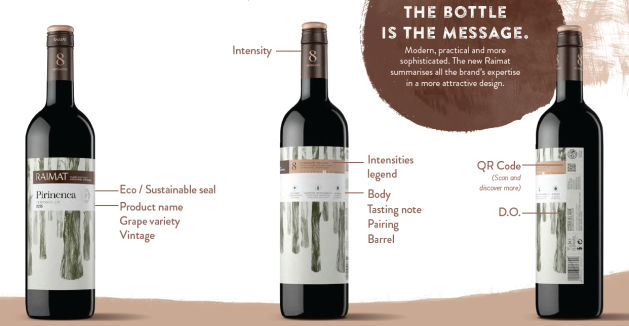 As a ‘test’ to see if what they say it true we were served 2 wines  with intensity 8  their  2016 Chardonnay aka Castell and a 2015 Tempranillo aka Pirinenc.

On the Castell bottle it was indicated that it was a full/intense bodied chardonnay that is very aromatic and tropical hints.  My personal finding was a  bright wine with intense aromas of a rich variety of fruits: peaches, grapefruit, lemons, limes, melons, and some flowery notes. In the mouth an overwhelming freshness, with an extended, pleasantly textured finish.  The acidity is smoothed out due to a part of the wine undergoes a malolactic fermentation and evens out the balance.  So I could definitely find myself in the description that is on the label. Of course what one tastes and smells can differ depending on what one knows from experience…

The same actually goes for the Pirinenc and the 12 months in oak barrels didn’t overdue it in the wine, but if I recall it well the winemaker told me that it wasn’t new oak they used… which would confirm that it wasn’t too present in the wine (what I prefer). Maybe they should indicate this on the bottle ‘old’ or ‘new’ oak, this way one knows how big the presence will be…

Both very nice wines. My wife and I even opened a bottle of Pirinenc  the day after so I think that proves home proves that I did really liked it 🙂 .  I will definitely try a few more of their wines to see the outcome or maybe just travel to Raimat (I could use some sun and warm weather 🙂 )

Now that I know what intensity 8 gives it will make it easier in the future when I see a bottle with a lower/higher intensity level to distinguish how ‘intense’ the wine(s) will be and I also think that’s the best approach if you are not a wine expert 🙂  .