Often when people talk about Franciacorta wines they never talk about Franciacorta, but about spumante or prosecco… but I would advise you to never say that to a wine producer in Franciacorta as they can’t stand it 🙂  Franciacorta bubbled wines are DOCG (Denominazione di origine controllata) meaning that the wine can only be made in a specific geographical location. And therefore the sparkling wine is called Franciacorta (nothing else). The geographical location of Franciacorta is on the hills between the southern shore of Lake Iseo and the city of Brescia. A few weeks ago I noticed the Franciacorta/spumante/prosecco topic was a very sensitive topic during a lunch I had with Maurizio Zanella founder of Franciacorta winery Ca’ del bosco. I know it might seem ridiculous for most people, but if only you knew what efforts Mr. Zanella and his colleagues had to do to get this status you would definitely understand their frustration.  But also if you taste all 3 types you’ll definitely notice that the taste and experience of all 3 is very different. With Franciacorta being my personal favorite (not only because it comes from my Dad’s region… but it helps 😉 ) Not that I’m saying you can’t find good bubbles in the other 2 types, but they are different in many ways 🙂 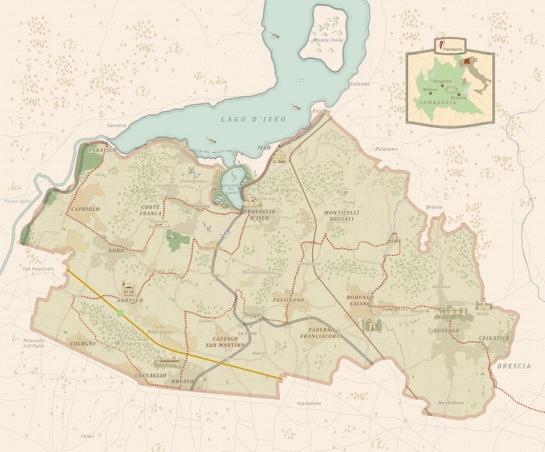 Another very interesting fact I found out during my lunch was that not Champagne ( as everybody thinks) ‘invented’ the sparkling wine, but according to ancient literature it was many years before that a pharmacist from the Brescia/Franciacorta region already discovered it… the only difference beeing that in comparison with our friend Dom Pérignon, nobody continued making sparkling wines after the  pharmacist’s dead. resulting in the wine dissapearing for some years.

Just like in many other wine regions (especially the DOCG ones) regulations for the wine making process is very strict. Besides that the vineyards have to be location within specific borders, there are also regulations about the soil… there it is specified that it has to be mineral-rich, granular-sized, calcareous gravel and sandy morainal soils that cover a limestone bedrock. As for the permitted grape varieties , they are  Chardonnay, Pinot nero and  Pinot bianco.  As for the winemaking it self the rules are even ‘stricter’ than for Champagne. In Franciacorta the rules are as follows:

About this last one, Franciacorta Satèn, I was wondering what the significance was… I always thought it had something to do with the silky feel of the wines … but it was Maurizio Zanella who revealed the true story.  Apparently for many years wine makers making bubbled wines had problems because of law changes (mostly because of our friends in champagne) that some names (Crémant, Cramant, etc..), indications, etc. couldn’t be used any more. As wineries Ca’ del bosco and Bellavista were sick of always having to change their labels(amongst other things) they decided to create and register their own ‘type’  and asked a copywriter to create one. This was the moment the Satèn was born. Initially only used by Ca’ del Bosco and Bellavista, but after a few years they released the name for the whole Franciacorta region to be able to use the nomination.  So in a few words Satèn was just an invention from a copywriter 🙂 🙂 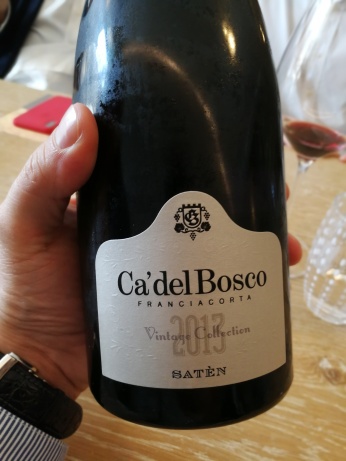 Mister Zanella is a born story teller and I felt very privileged to be able to sit across of Mr Zanella during a lunch! I also discovered that Mr Zanella’s mother was born in the same village (Bormio) as my dad 🙂 making me an even bigger fan of their wines 🙂 . He found it important that before we would talk about specific wines, we would know more about the wine region and its history.

Ca’ del bosco is one of the 3  major Franciacorta producers together with Berlucchi and Bellavista.  Ca’del bosco that means ‘house in the forest’ in English, is exactly what it was when Maurizio Zanella’s Mother (Annamaria Clementi Zanella) bought the property early 1960’s. it was a hillside with two hectares of land, surrounded by a dense wood of oak.   It is with the help of farmer Antonio Gandossi that she started planting vines (initially for own use). It isn’t until in the late 1970’s that André Dubois would help Ca’ del bosco to lift the quality of their wines a few levels higher and it was a huge success…. From then on they only kept climbing higher.  I must say it is very impressive how a small winery grew that much in such a short period of time. I might even add the growth of a whole region, as because of all their hard work they have put a small region on the map.

As Maurzio loved and admired his mom a lot, he decided to create a special cuvee dedicated to his mother aka Cuvée Annamaria Clementi.

Of course during our lunch at the Michelin star awarded restaurant Senza Nome we also tasted some of the beauties from the Ca’ del bosco cellar.  A lovely meal I’d say 🙂 one I wouldn’t mind having again.

We started with their ‘entry’ level wine, although I find that term maybe a bit denigrating…anyhow their Cuvée prestige is wine they produce the most bottles of and according to Maurizio it is also the most difficult wine to make. Much more difficult than the other ones he makes. As for the other ones nature does most of the work.  The Cuvée prestige is  a beautiful sparkling wine with even more beautiful aromatic profile with spicy notes with tones of I would say melon. This Franciacorta (75% Chardonnay, 10% Pinot Bianco and 15% Pinot Nero) offers spicy and vibrant aromatic tones that you don’t find in its peers. A job to drink a high level wine… so we can only imagine how their more ‘matured’ wines taste like.

To me what makes the difference between a good and lesser sparkling wine in general is the type of bubbles. The best to explain it is with a piece of fruit: if you eat a piece of fruit let’s say a peach that isn’t ripe yet you can eat it, but it wouldn’t taste like  one that is perfectly ripe and juicy. With sparkling wine if it didn’t age long enough you can drink it but the bubbles will be more aggressive, if you let it age a bit longer they will soften and more pleasant to drink. The only disadvantage for me is that the ones that age longer are usually also more expensive 🙂 but better to drink less and have higher quality  than the other way around. Besides when I drink sparkling wines with aggressive bubbles I know I’ll be having an enormous headache  the next morning.

The next Franciacorta to be tasted was the Satèn. It was the first time I tasted it, but it was love at first sight. Very elegant sparkles that has aromas of yellow fruit and white flowers. On the palate creaminess and ripe yellow apple, crushed herb alongside a soft perlage. Now I know where the saying ‘like an angel peeing in your mouth’ comes from, as this sure felt like it.  This wine matched perfectly with the Tartare red Gambas aka Gamberrro rosso di Mazara e Caviale, patata morbida al’alceto di vino. Trust me, it tasted as good as it sounds 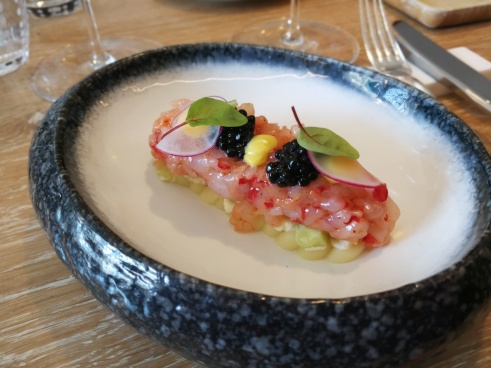 For the following course which was a pasta (home-made) with pesto raw marinated tomatoes (again all home-made) we were served a 2014 bottle of Chardonnay (Curtefranca Bianca DOC) that brought back lots of memories. I drank it the first time many years ago (I think early 2000’s) at an Italian restaurant in Frankfurt (I know out of all places). That’s also when I discovered Franciacorta also made great non sparkling wines. Maurizio’s idea behind this wines wasn’t to make a copy of Burgundy wines or any other famous wine as to his opinion if you want to drink a great Burgundy (of which he is big fan), you drink a wine from Burgundy… and that’s his philosophy with all the wines he makes. He does his own thing without watching too much to other and certainly not being a copycat. A very nice result for both this white as the red Sebino Rosso IGT (an elegant blend from Cabernet Sauvignon, merlot and cabernet franc) we got served with the Filleto di Manzo with old Balsamic vinegar. 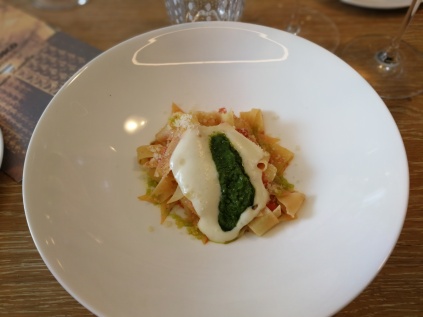 The stars of the lunch were without any doubt the bottles of wines, but with 1 exception. Giovanni Bruno’s revised Tiramisu, that gave a whole other dimension to tiramisu and lifted up the level. 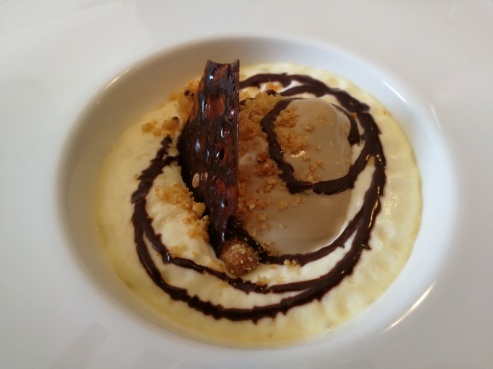