For some reason I’m never able to sleep late, I’m always awake around 7 o’ clock and when I see the sunshine it is even more difficult to stay in bed. The first thing I did yesterday (same as today) is write the next post. After doing that, this morning I went to a little town called Boves (btw, my girlfriend doesn’t have my problem, so she kept sleeping). Boves is a small town near Cuneo (the capital from this region). I needed to go there to buy the ‘Bovesine’, these are chocolates filled with cognac, grand marnier, etc… and are a specialty from this region (in Cuneo they are called Cunesi). Not that I like them that much (I don’t like alcohol and chocolate together), but my favorite Zia Livia asked me to buy them for her 🙂 :-). To get there (about 60km from where I’m located for the moment) I took the regular way and not the highway… as then at least I can enjoy the view.

The below picture was one of the first views I had on my ride.

Just beautiful! And this was one of the many sights I got to say (really worth doing).

My first task when arriving in Boves was buying these chocolats at Pasticceria Rebecca after that I explored the little town, + there was an open-air market at that moment, so that’s even better 🙂 . A little town close to Boves that is really worth going to, is Saluzzo, a little medieval town…

I was really exited reaching the afternoon, as my Zia Livia is also in Piemonte (Torino) to visit a friend of her and we had planned to meet around 3pm in at Alba.

Alba, is for me one of the nicer towns or I might even say small cities in the neighborhood. I especially like via Vittorio emmanuele (lots of deli shops ), but also for the shoppers, there are some very nice boutiques. And on top of that you get the fragrance of Chocolate! Yes, that’s right, chocolate. The reason for that is that the Ferrero factories are located right in the heart of Alba and whenever they are melting chocolate, you smell it in the whole town (it actually makes one hungry 🙂 ). For all you that don’t k now Ferrero, they are the ones from Nutella, Ferrero Rocher, Mon Cherie chocolats or the Kinder Bueno.

And to make a long story short (er) we encountered my aunt and here two friends earlier than expected and one of the friends insisted to invite us for lunch (for her small, for us pretty big). So again we had a celebrative lunch 🙂

Last evening we went to my favorite restaurant in this region, ‘ Osteria da Gemma’. This restaurant is not for small and/or picky eaters, as you don’t have menu, you just have to eat what they serve. And believe you me, they really serve A LOT. As starter or antipasto, we had vittelo tonnato, steak tartare (piemonte style), Insalata Russa, salami and coppa. We then continued with ‘gli primi piatti’ tagliolini and agnolotti al sugo di carne. Followed by rabbit and veal with peperonnata. We finished with a choice of desserts (they just gave them all) Strüdel, Crème caramel, semi freddo. ALL HOME MADE!!! We drank their own Dolcetto wine and water. How much would you guess we paid? 48EUR for 2!! 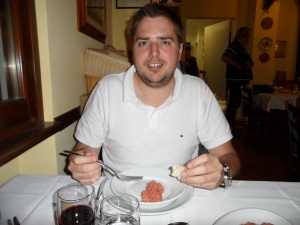 Another perfect end of a perfect sunny day. Today we are going to my mom’s favorite Italian city Torino.