I know it might seem like yet another excuse to go to a restaurant, but I really do find this initiative from ‘Jeunes Restaurateurs d’Europe’ (aka JRE) wonderful.  JRE is an association initially founded to support young chefs and also to raise a certain solidarity amongst them. Initially they were  only active in France (around 1974), but they quickly expanded to other European countries.  12 countries are member of the JREl, but only 11 are European countries.… N°12 was the first non-European country that joined, the country I’m talking about is Australia. Since 2007 they are like an EU embassy outside of Europe. Personally I’m really happy that so many things are being done to support young chefs to succeed in their life dream…

Lately JRE  Belgium decided to collaborate with ‘Make a Wish’. Did you ever hear about this initiative? Make a wish is an association of volunteers  which wants to realize the dreams of children that are fighting against a life-threatening disease.  They do this thanks to the generosity of gifts from donors and fundraising activities (not only monetary gifts… ).

And you can really trust me that there are some real beauties in this guide!! I am going to support this initiative, hopefully you guys will follow! Pass this on to your friends! 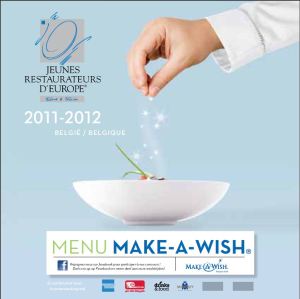 One thought on “Eating for a good cause”