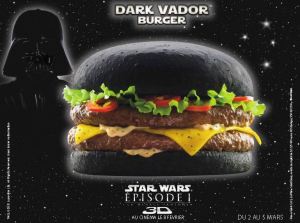 This weekend  Quick France (French/Belgian fast food chain) sold a special Dark Vader burger. Although  I’ve never been a big Star Wars fan, when food gets involved I started to get more interested. I know it might seem over the top to drive to France to have a hamburger, when at the local Quick they also sell special hamburgers as tribute to the new Star wars Episode 1 3D movie… But what makes the French burger more special than the burgers they make here in Belgium, well first of all the bun they use was black (and not because they burned it! On top of the black bun, they also add red peppers to spice up the burger… At first it seemed a little bit too far for me just to get a burger, but let’s just say that Valentijn (who asked me to join him to France) didn’t need to much pep talk to convince ;-)and well, this burger was only available this weekend

And I must admit it was worth the drive. I was also surprised of the amount of Belgians who were there to try it :-), but I’m sure they were bigger Star Wars fans (too bad that they didn’t wear a Darth Vader outfit 🙂 ). I’m sorry you guys didn’t try it, next time Quick pulls a stunt like this, I’ll inform you 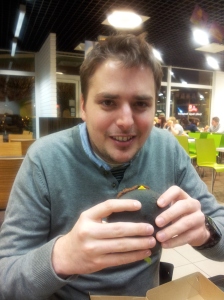 The force was definitely with me!