In the big apple part 1 you could read that I had found a great hotel and the best ways to explore the city. I could start this part talking about what you should be seeing in NYC, but people who know me (and I think people reading my blog as well by now), know that when I travel the most important (or one of the most important) is eating good… so this wasn’t any different for this NYC trip and I’ll keep the things to see for one of the next parts 🙂 because to have enough strength to explore the city one needs to eat well (and most importantely not skip a meal).

Knowing that NYC has hundreds or maybe even thousands restaurants doesn’t make it easy to make a choice of which ones you want to visit in 7 days (I think somebody living in NYC doesn’t even get to try every restaurant). So I decided to bring in some help from friends who go often to NYC, friends living in NYC and NYC friend foodbloggers…. but let me just say that it didn’t make the actual picking of the restaurants easier (as I thought it would)… the Total NY list I had initially might have decreased, but I still had a list of at least 60 restaurants… so I just wrote them all in my little Moleskine cityguide booklet (I liked this as this booklet in pocketsize contained a map of NYC streets and the NYC subway) subdivided per district or are of NYC and checked on the spot which restaurants were close by where I was at that moment. Or that’s what I did most of the time, because there were indeed a few eateries I just had to do in NYC 🙂

In general I found NYC quite expensive to eat, LA or Miami are much cheaper… not that this stopped me from eating of course (a man has got to eat).  What I have to admit is that in general I ate well, but not extraordinary or mind blowing for a normal price (but maybe I’m just too spoiled)… OK, enough jibber jabber and more sharing of eateries, let’s start with where you can have lunch

One of the places I just HAD to try when in NYC was Eataly, I already went there on day 1 for lunch (a man has got to do what a man has got to do). I think I was about to cry out of happiness or maybe have a heart attack of the overwhelming choice of what to eat (really). I have never seen so much great Italian food in 1 place (no, not even in Italy).  You can ask my fiancée, I was like a kid in a candy store (or like a Spinelli in a food store ;-)).  So again we had to choose (it just didn’t stop during this holiday), did we want pizza, pasta, meat, fish, veggie, just some antipasti, which kind of wine did we want…., but we did I we chose to just sit in the ‘middle square’ of Eataly and try different things. Starting with some salumi (ham, salami …) followed by the day special a sandwich with Sicilian sausage) in between (a bit too salty if you ask me) and my fiancée took a salad. Overall a nice meal accompanied with some good wines, but for me a bit too expensive
for what you get… but definitely a great concept and a must see as food lover in NYC 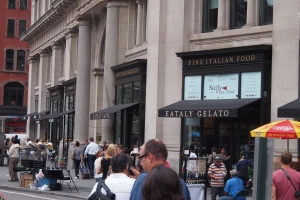 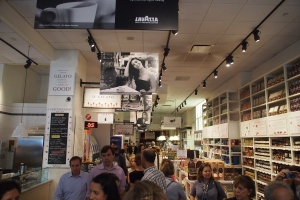 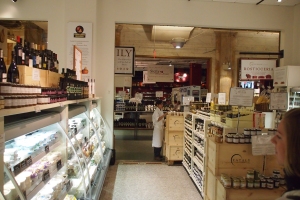 Another eatery everybody told me to go to was the Chelsea Market. At first when my friends talked to me about the Chelsea Market I was expecting to see a kind of open air market in New York were you would be able to eat the things the stalls are selling… But it is actually one very big food court, but with no fast food chains in a very vintage like setting. There are around 35 different small restaurants (American small, not European small) that are all specialized in a type of food, for example a bakery, a lobster restaurant,  a cupcake shop, sandwich shop… BUT the best part of all you can see how everything gets made freshly, because the kitchens are setup with glass walls that allow checking it all out… 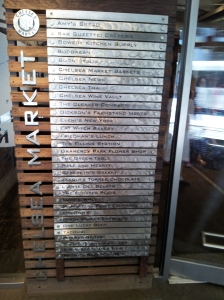 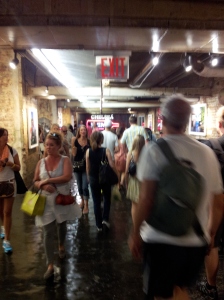 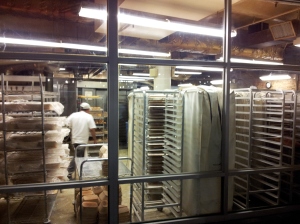 Our choice in the Chelsea Market went to Friedman’s lunch where I had a burger (the real deal) served with French fries and Ketchup that was not from Heinz (I was as surprised as you are now) and my fiancée for a Turkey sandwich. A nice lunch for a correct price… but still lots of places to try at the Chelsea market and definitely a place to visit for a nice lunch 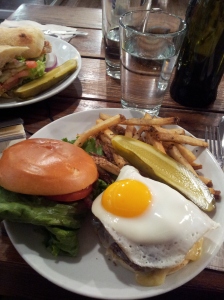 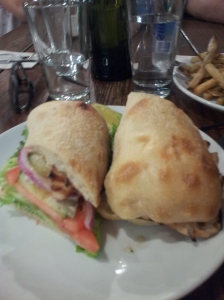 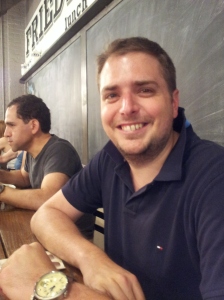 The third restaurant I want to share with you guys is Tartinery, a nice little French eatery where you can eat some nice slices of bread, salads or sandwiches AND that has a great wine list 🙂 (Is actually also known for it). Tartinery is located in Mulberry street which is a street in New York’s very own little Italy. I know it has no editorial value, but I just need to share the following. On our way to Tartinery I saw the cooles magnet with the following on it: ‘Not only am I perfect, I’m Italian too’, I wanted to buy it for on my fridge but forgot it. OK, back to Tartinery. For our lunch here I had the Jambon Puree (Ham with mashed potatoes) and my fiancée the Mozza … both nice slices accompanied with a garden salad and for me followed by a ‘Tarte Tatin’. We had a nice lunch with portions big enough for lunch for a still ok price considering it is NYC. 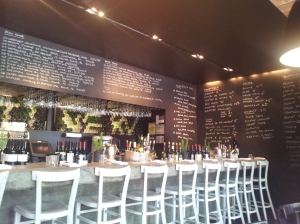 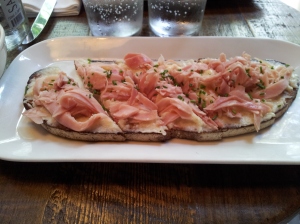 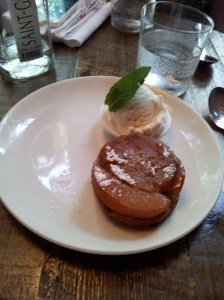 The another lunch eatery I want to share is ‘INO , this was for me the one of the nicest lunch places we had lunch, good, low price, in a quiet neighborhood and very njummy  (Italian influenced)… nothing more to add, just try it yourself. I can say for a fact it wasn’t easy to choose the sandwich or other lunch dish you wanted to eat as they all seemed good… 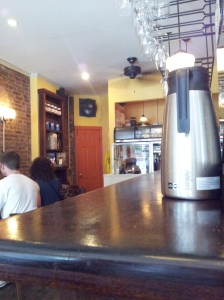 The last lunch place I want to share is actually for the healthy people amongst you (I want there because I promised my fiancée I would try at least one healthy lunch). This lunch was at Hale and Healthy  and I have to admit that I liked it the whooooole healthy way 🙂 an idea would be to buy your food here and eat it in Central park or NY high line. I went for a healthy sandwich (FYI, the red on the picture is NOT bacon, before you start judging me) and my fiancée this was an even better experience as she could choose everything she wanted in the salad from an almost endless choice of vegetables, nuts, … Definitely the place for you if you like to keep it healthy 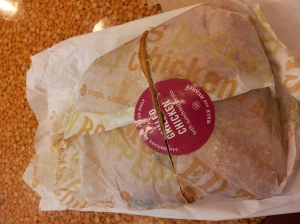 Wow, I have told you guys so much… Sorry for that, but I like to make sure you get the whole picture and believe it or not, but to be continued with some dinner spots, tips and things to see in NYC…..