Who says Budapest (or Hungary), says thermal baths… they are just inseparable. Unfortunately we didn’t get the chance to try one of the many famous bath houses in Budapest, or better it was just too hot outside. With an outside temperature of 36°C at 11a.m. the last thing I think about is going into an even hotter bath :-). It is true that most of these bath houses also have a regular (cold) swimming pool, but it just wouldn’t be the same… but now I at least have already 1 excuse to go back to Budapest (another reason you’ll find out later in this post).

The most famous bath house for me was the Széchenyi thermal bath as it got used in lots of Hollywood productions  I even think in one ‘The Simpsons’ episode (but not 100% sure)).  You might also know it as they mostly use the image of the people playing chess while sitting in the water. The real reason it is famous is because it is the largest medicinal bath in Europe. Its water is supplied by two thermal springs, their temperature is between 74 °C and 77 °C. And every type of bath has a different medicinal effect. 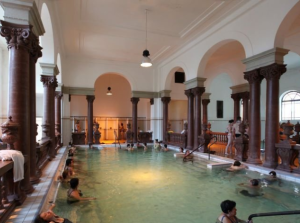 A few other well-known therminal bath houses are Gellért (most expensive one) , Király and Rudas. There are obviously many more, but these are just the most famous ones.  Lots of these bath houses are actually part of the heritage from the time the Turks ruled over Hungary…. but read all about the history on this wikipage. It must be said that the therminal bath are located in some very beautiful buildings!

All the visiting and walking obviously made me very hungry and believe it or not, but Budapest has a lot to offer on gastronomical level (something I really didn’t expect). A dish you just have to eat while you stay in Budapest (or Hungary) is Hungarian Goulash, I think there is no more typical dish (besides Foie gras and fish soup for some reason). I only had it once for dinner, I don’t know if it was the best Goulash  (served with sour cream and a pickle) in town, but good enough for the first night in Budapest :-). I had it in a back street restaurant called M restaurant. No fancy place, just honest food and friendly service all one need on the first evening….  If you would go there I do recommend the Chocolate dessert with a bit of chili in it. 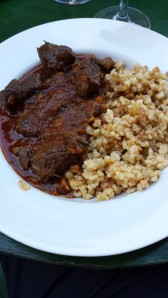 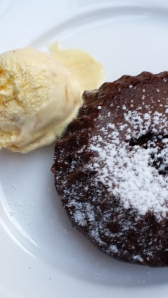 There are a few other restaurants we tried I want to share with you. The first one is restaurant Baldaszti (part of the Baldaszti group) which is located Andrássy útca, which apparently is one of the fanciest streets in Budapest (the fancy shops did make a bell ring 🙂 ). Anyhow we had a lovely lunch and It was actually here I discovered that Hungarian food is more than Goulash and they also make refined food combined with very friendly service. I took the asparagus variation, nettle, coconut espuma and an at 64° poached egg. My fiancée chose the marinated salmon with a fennel tabouleh salad. Some really great food and an ideal lunch! We both combined this  with some lovely rosé wines (the sun makes me want to drink rosé) and I was again very happy to see so many Hungarian wines on the wine list!! In case you want to know we had the 2012 BÁRDOS ÉS FIA Rosé Cuvée and the 2012 SAUSKA Rosé. They were both good, but the Bárdos had that little something extra… Afterwards we also had a heavenly dessert aka sweet cottage cheese souffle with strawberries (those hungarians are masters in making dessert!) 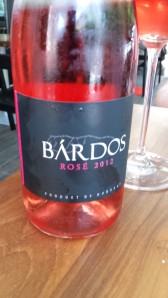 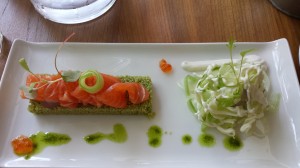 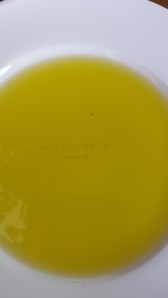 The second restaurant is one we did with my fiancée’s uncle and is located a few steps from the Széchenyi bath house. This restaurant was called “Robinson”.  I liked it as is right at a little “pond” and on a hot day a little breeze always feels nice.  On top of that they also served some nice food, more classical dishes, but this doesn’t make them less good of course :-).  Even though it was hot me and my fiancée’s uncle went for the” borjú paprikás tojásos galuska” aka Veal stew with egg dumplings and a garden salad… and my fiancée just took a salad. And again we had some killer desserts.  I finished with the carrot cake (which I love) and my fiancée with the New York cheese cake, raspberry sorbet. 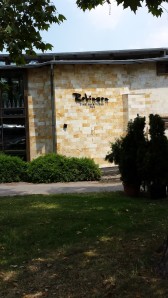 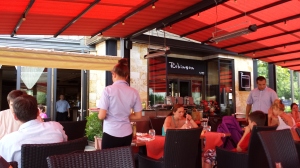 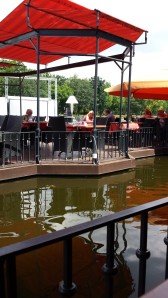 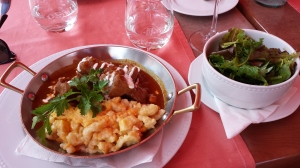 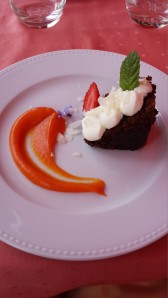 In case you like top gastronomy a visit to restaurant Onyx, unfortunately I wasn’t able to try this restaurants (reason 2 to go back Budapest). But a very reliable source (Bram and Ingrid from pazzo) told me this is a restaurant worth trying.  They have 1 Michelin star and the chef was finalist of the Bocuse d’or contest.

The last I want to share with you is  Big fish. Big fish is as the name might already reveal a fish restaurant. On the wall they have a huge black board which is actually the menu or better the list of fish you can order, the list goes from salmon to sea bass… everything is prepared in the simplest way (on the grill) leaving you the real taste of the fish without any heavy sauces and all… I’ll be honest I when I saw fish and freshly made chips on the menu I was really craving for it (I know what a barbarian). My fiancée want for a lighter meal and took grilled salmon with a garden salad… A popular dish I saw on many tables were the Blue Mussels . The profiterol dessert also looked tempting, but my woman didn’t share 🙂 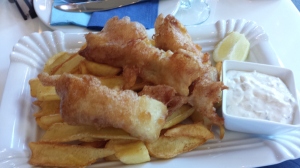 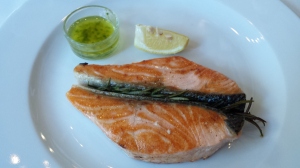 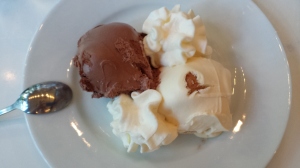 To make a long story short, Budapest is a city that has a lot to offer and I’m sure everybody will find something of its liking. I am very convinced I will be back in Budapest, not sure when, but I’ll be back (said in the Arnold Schwarzenegger Terminator way 🙂 )

BTW in case you were wondering, I stayed at the Novotel Budapest Centrum, which was located really central to get everywhere and few steps from all public transport. (Behind corner the New York Café).

Oh sorry forgot to mention, for the food and market lovers, a walk in the Great Market Hall is nice 🙂