Ever been in Barcelona? No? What are you waiting for??? Ok, it also took me some years to get there, but I really fell in love with this city. I’m not going to talk about this wonderful city, but about a great restaurant group you can find in Barcelona.  The group is called Grupo Tragaluz which in English would actually mean “Skylight”. My girlfriend and I have tried the Bar Lobo, Agua and Bestial. But I’m sure that the next time that we will be in Barcelona , we will go and try the other restaurants of the group. J.  The Group actually has all kinds of restaurants and they all have their own specialties. From a small tapabar to the Michelin star awarded Tragaluz restaurant. They now even have a hotel and I have to admit, it is quit tempting to go there as well.  Both Agua and Bestial are at the beach in Barcelona (Barcelonetta), although from both restaurants I would rather return to Bestial than to Agua.  I liked the food at Agua, and the restaurant is also mentioned in a lot of travel and restaurant guides, but  I think you pay more because of its location (but for Belgian Standard it is still in an affordable price range).  To start we  had the Iberian Ham (I really love ham) and some tapas. Followed by the  “Arroz con bogavante y butifarra” (rice with lobster and botifarra) and the “Langoustines” . We also  had a great regional wine. And I finished with my preferred dessert,  Tarte Tatin andsome coffee, basically a great meal.

As mentioned above, I preferred restaurant Bestial.  Maybe because of the great setting where all the trees were nicely illuminated and because had a table outside or maybe because of the nice service? It could have also been the really great food!!  We again started with some nice tapas  one of the “tapas” was a small wood oven backed pizza, some Iberian ham, tempura of vegetables, etc… after that we had the day suggestion  and we finished with these woooooonderfull pies. 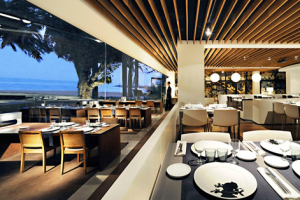 And this leaves us with Bar Lobo , just a few minutes from the Mercat de la Boqueria. Sitting on a little square,  under an umbrella (as it was so hot at the time) enjoyed an endless choice of tapas with some local rosé and white wine (I think the picture below speaks for itself)and I think we almost tried all the tapas they had (besides the anchovies)… I got more hungry while eating, that’s how good it was